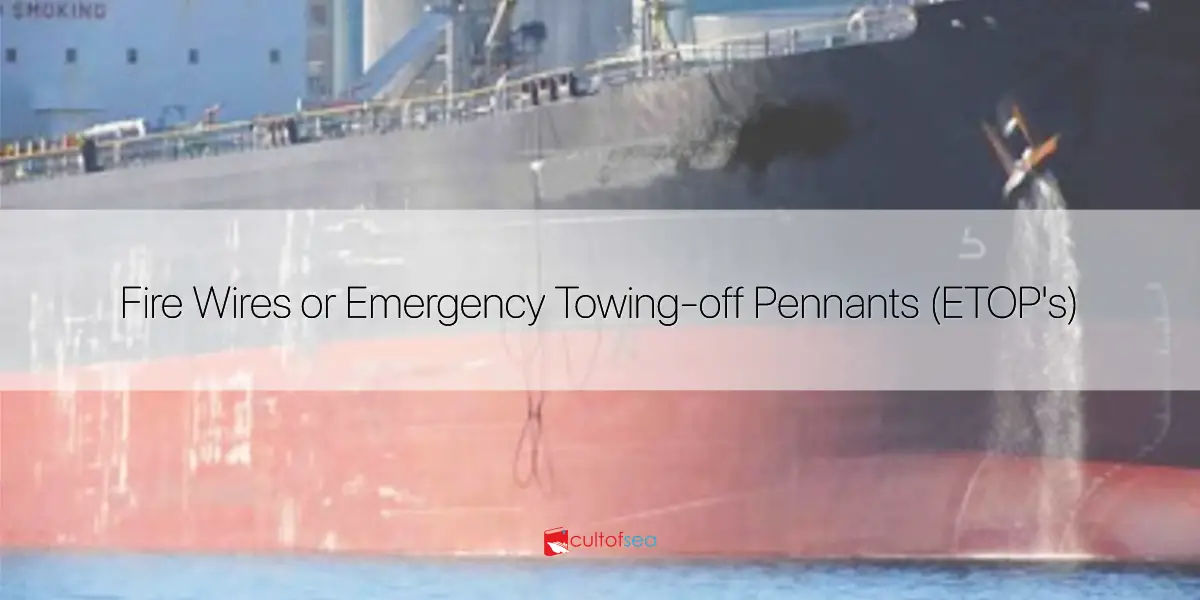 Emergency Towing-off Pennants or ETOP’s is usually referred to as “ Fire wires,” which provide a method of towing the vessel away from the berth in the event of an emergency.
The intent of rigging fire wires or emergency towing pennants is to facilitate the movement of the vessel by tugs without the necessity of putting people on board to rig lines. In other words, it is used to assist tugs in the removal of the ship without the intervention of any crew member.

OCIMF does not support the use of emergency tow off pennants although some terminals may still require them when tankers are moored alongside.

Any requirements for emergency tow-off pennants should be subject to review and risk analysis by terminals to determine whether or not there should be a requirement for ships to deploy them. Questions that should be asked include:

Some terminals require different methods and operators should be aware of local requirements.

The use of emergency tow-off pennants is not recommended by OCIMF. However, some locations require them to satisfy local rules and regulations. More information is available in OCIMF’s Lloyd’s Register Risk Assessment of Emergency Tow-off Pennant Systems (ETOPS) Onboard Tank Vessels.


The existence of “fire wires” or, more correctly, emergency tow-off pennant systems (ETOPS) is based more on history and having “always done it that way” than necessity. Historical data shows no documented evidence of their use. At the same time, the tanker industry has evolved bringing the practicality of ETOPS into question. With the continued occurrences of injuries, both minor and serious, to vessel personnel deploying and recovering ETOPS, it is time to discontinue the routine practice of deploying ETOPS.

MEG3 recommendation is obsolete, however contrary to above recommendations, some terminals require fire wires to be rigged and positioned. Unless the terminal specifically advises, emergency towing-off pennants (fire wires) should be positioned. This is to be discussed during Pre-Berthing Terminal information exchange or in Ship Shore Safety Key meeting with the Terminal. 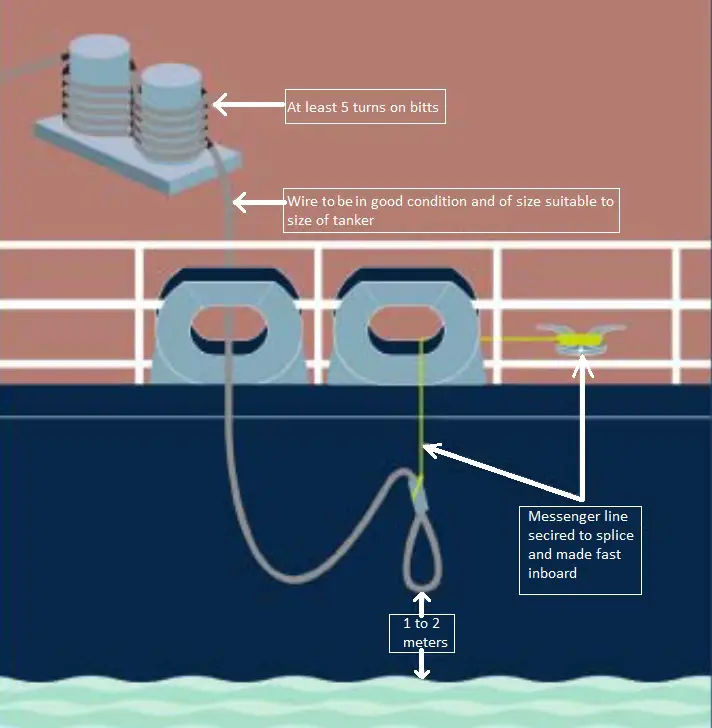 If required, emergency towing-oft pennants are commonly provided at the offshore bow and quarter. If required at a buoy mooring the emergency towing-off pennants will be rigged on the opposite side to the hose string. To facilitate emergency release using emergency towing-off pennants, they should be secured to bitts with a minimum of five turns and be led directly to a ship side chock with no stack on deck. The outboard end of the line is provided with an eye to which a heaving line is attached and led back, to the deck. During loading or discharge, the heaving line is periodically adjusted to maintain the eye of the emergency towing off pennant on to two meters above the water as shown above. Some terminals require different methods and operators should be aware of local regulations. 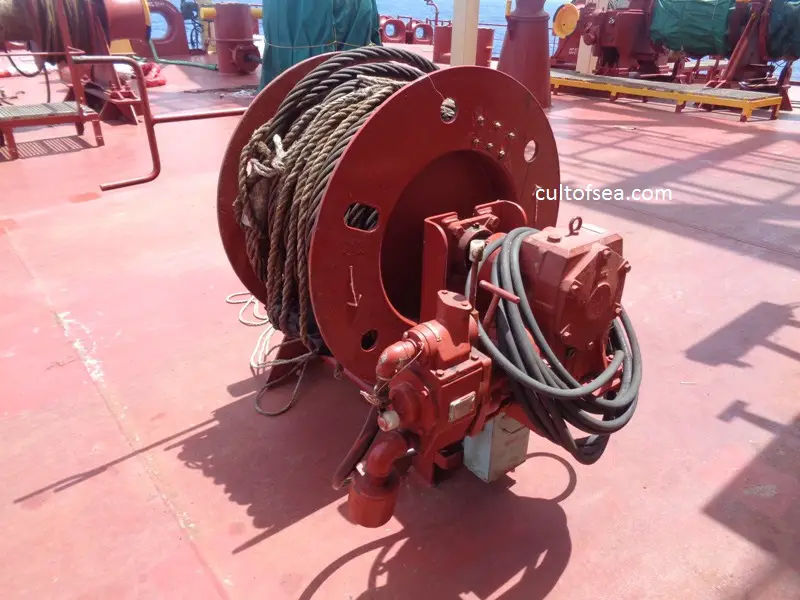 When not in use, the pennants are preferably spooled onto reels which may be located on or below deck. Emergency towing-off pennants should be of 6 x 36 IWRC construction and be made of the same type of steel as recommended for standard mooring wires as per MEG. The use of synthetic or natural fibre ropes that do not have appropriate fire-resistant characteristics is not permitted as these would burn in the event of a fire. However, synthetic fibre ropes may be considered for use in the future if they are developed with adequate fire resistance. Their use will ease the handling difficulties often associated with wires. In view of their low coefficient of friction, more than five turns may be necessary when securing them to bitts. The following table provides guidance on minimum strengths and lengths for various ship sizes. However, lengths may vary depending on the positioning of mooring bitts and the ship’s freeboard.

Emergency towing-off pennants should not be attached to a set of bitts with an SWL that is less than the MBL of the pennant. It should be noted that for bitts (double bollards), the SWL marked on the bitts should be the maximum allowed when using a wire rope belayed in a figure of eight near the base of the bitts. This will be half the maximum permissible SWL when a single eye Is placed over one post.

Below is an example of wire rope and bitts on a Tanker ship with DWT 120,000: 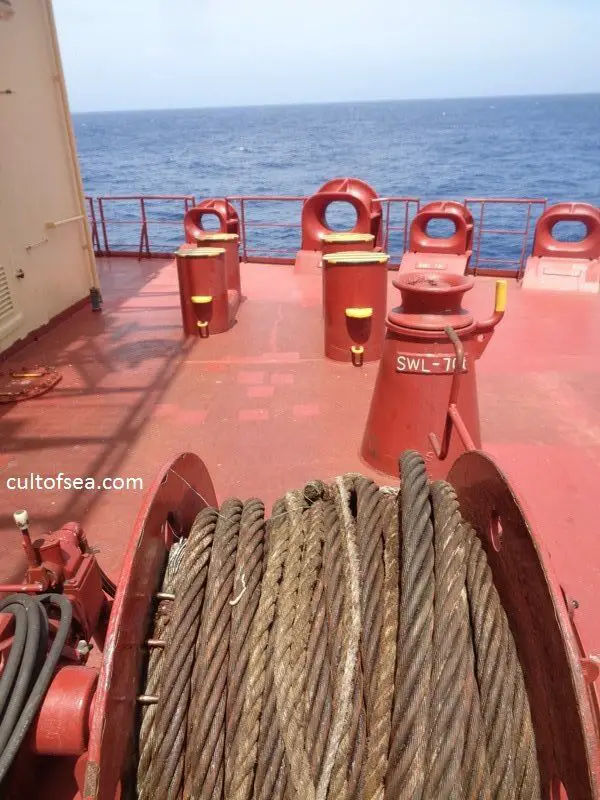 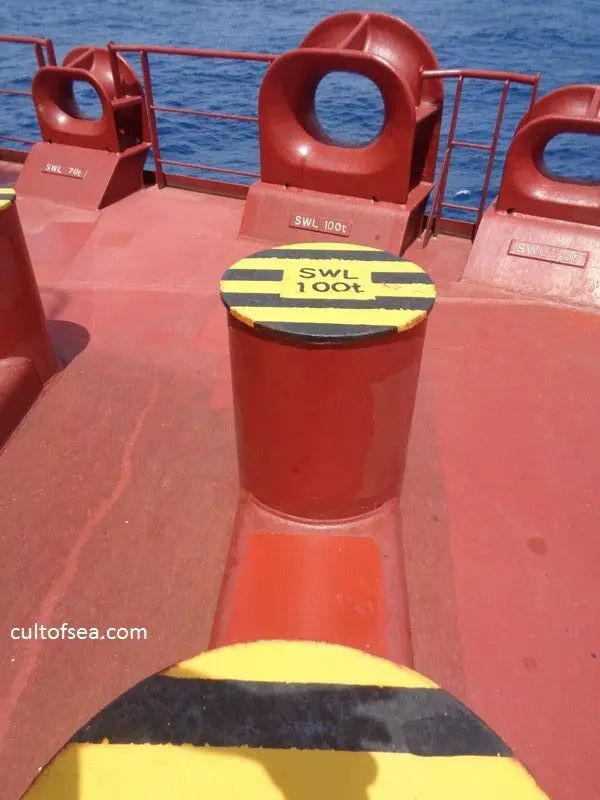 SWL of Bitt and Chock

Wire Rope Specifications on a Tanker Ship with DWT 120,000