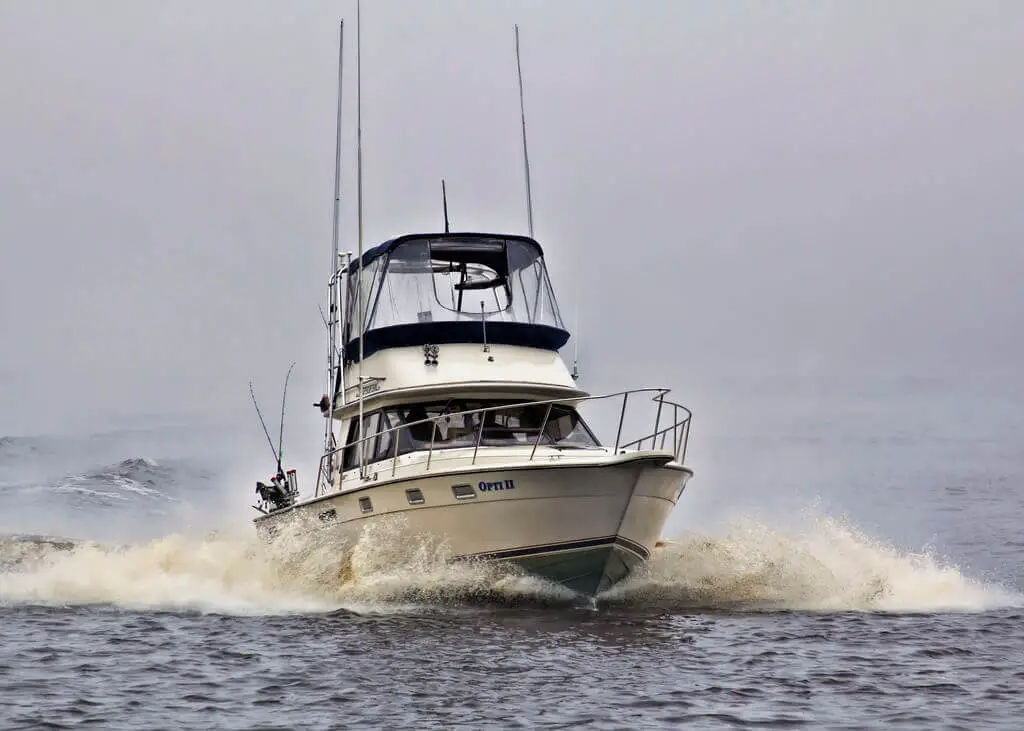 The estimation of speed and knowing when to reduce speed when approaching a berth is not always easy and confidence can only come with experience. On very large ships, such as VLCCs, some guidance may be available from reliable doppler logs, but on many ships, a doppler log is not available. In any case, total reliance upon instrumentation is not wise and is no substitute for experience. A pilot jumping from one ship to another, sometimes several during one duty period has to develop a “feel” for the type of ship he boards and con “by the seat of his pants.”

Many casualties are proven to occur as a direct result of excessive speed. Its effect can be insidious and a Master may find that he cannot keep up with events, which are happening too quickly. Effective control of the ship is slowly but inexorably lost. Against this are commercial pressures, on Masters and Pilots alike, for expedient passages and turn-around times. Whilst there is arguments, either way, they are clearly not compatible and experience has shown that a fast pilot is not necessarily a good pilot – just lucky!

It is, therefore, desirable to balance a safe and effective speed of approach, against a realistic time scale. It would be unwise for example, to conduct a three-mile run-speed of one knot. Three hours would stretch anyone’s patience!

It is, of course, impossible to give exact figures, the requirement is dictated to a large degree by variable factors such as the type of ship, tonnage, draft, shaft horsepower, the wind, and tide. Generally speaking, ships of less than 40,000 dwt are inclined to run their way off relatively quickly when the engine speed is reduced, whereas larger ships carry their way for much larger distances. Speed must be brought firmly under control at greater distances from the berth.

It is usually obvious when the speed of a ship is too slow and can be easily overcome with a small increase in revolution; it is not always obvious when the speed is too high. The speed of a large ship, during an approach to a berth, particularly without tugs, can increase in an insidious manner and it is invariably difficult to reduce that speed in a short distance and keep control of the ship.

If we look at Figure below we may illustrate some important points. In this example we have a medium size ship of 60,000 dwt, which we will assume is diesel powered with a single, right handed, fixed pitch propeller and single conventional rudder. At one mile from the berth and running at an approach speed of 6 knots, it is well in excess of a dead slow speed of 3 knots. As the ship approaches the mile mark, speed is still over 3 knots, despite a rapid reduction in rpm. It is now necessary to stop the engine and thence sustain a prolonged period of increasing stern power in order to
stop the ship in time. 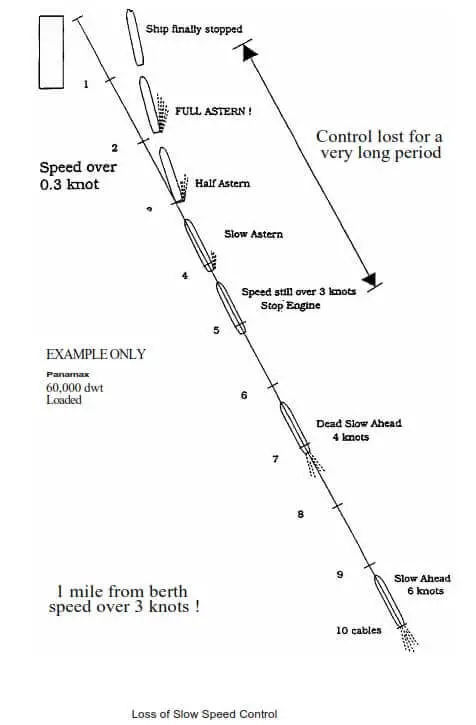 During this substantial time interval, the ship is at the whim of transverse thrust, the wind, tide, bank effect or shallow water effect. It is effectively “out of control” in so much that we can only stand back and hope that it will do what we want. This is literally hit or miss stuff and the more we can reduce this prolonged period of increasing stern power and thus retain control, so much the better!

In the Figure below we see the same ship, again one mile from a berth but this time at its dead slow speed of 3 knots or less. Before it approaches the 1/2 mile mark it may also be necessary to stop the engine to further reduce excessive headway and allow plenty of time to adjust the ship’s approach and positioning for the berth. Now the biggest worry is the loss of rudder effectiveness at very slow speeds, particularly without any tug assistance and the fear that we cannot keep control of the ship’s head. For a variety of reasons such as poor steering, the wind, shallow water or directional instability, the bow may well begin to develop an unwanted sheer, alternatively, it may be desirable to adjust the attitude of approach. Control is best achieved by applying full rudder and utilising a short but substantial burst of engine power. This is the “Kick Ahead” technique. There are, however, several pitfalls to avoid, which can all lead to an excessive increase in speed, thus ruining all the previous efforts to control it.

If a kick ahead is to be utilised, it is essential that the rudder is seen to be ‘Hard Over’ before the power is applied. Whilst this ensures a maximum rudder turning force, it also “puts the brake on” some of the residual speed, directly resulting from increased power. With the helm at anything less, such as 15° or 20°, less rudder force is applied at the cost of increasing forward speed. It is also essential that the power is taken off before the rudder is returned to amidships or angles of less than 35°. Failure to do this will result in a brief, but important interval, during which time most or all of the power applied is again being used to increase speed.

The duration of a kick ahead should be as short as possible. Prolonged use of the power, after the initial steering effect has ceased, will only result in a violent sheer and an unwanted build up of speed. This will result in the need for yet another kick ahead to rectify the situation. Due to the scaling factor, this is particularly important with scale models, as the effect is several seconds faster than a real ship. As soon as the revolutions reach a maximum, the power must be taken off.

It is difficult to quantify the amount of power to apply for a kick ahead, as it very much depends on the size of the ship and the needs of the ship handler at the time. It is important, however, to appreciate the ratio of Shaft Horse Power (shp) to Tonnage (dwt) that exists from ship to ship. 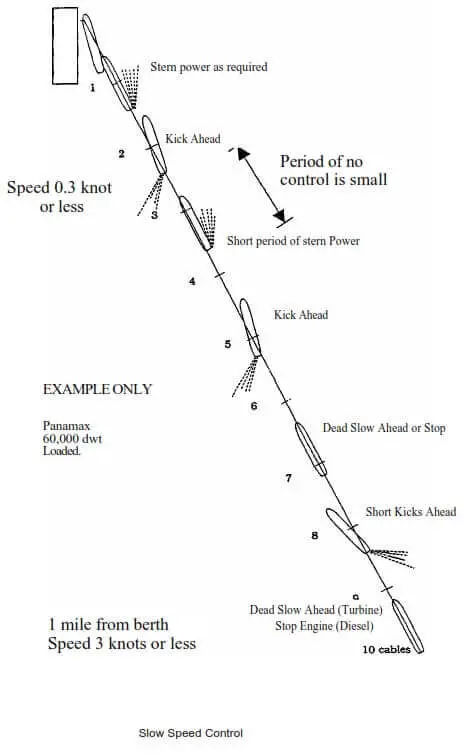 The type of propulsion unit is also an important factor to consider when utilising the kick ahead. Diesel powered ships are generally very good, with the power coming in quickly and effectively. The number of engine air starts, however, varies considerably from ship to ship. Some may be good and have an unlimited start-up capacity, others may have only two air bottles which at very best might give 10 to 12 starts each. Far worse cases are frequently experienced, with the infamous words “only one start left pilot” ruining what was otherwise a good day!
Working with a Turbine ship is very different, in so much as the turbine is slow to come online and build up power. This is not particularly useful for kicks ahead. When slowing down, but still wishing to keep control of heading, it is better, if conditions allow, to leave the turbine on dead slow for as long as possible rather than stop the engine. Some turbines can be run at minimum RPM ahead which is even more effective. The turbine is thus online and instantly available for use.

Related Article:   What is Transverse Thrust?

Without the assistance of tugs to control both heading and speed, the correct use of the kick ahead is the single most effective means of keeping control of heading and speed particularly with directionally unstable ships. Clearly, the ship must be stopped sometime and indeed several kicks ahead, no matter how carefully applied, will result in a slow build up of speed. This can be carefully balanced with short periods of modest stern power thereby just easing the speed back, or even stopping the ship entirely if so desired. The Master or Pilot is thus able to enjoy far longer periods of total control which would not be possible with the ship running at higher speeds.