You are here: Home / Ship Handling / Ship Interactions when Navigating in a Channel 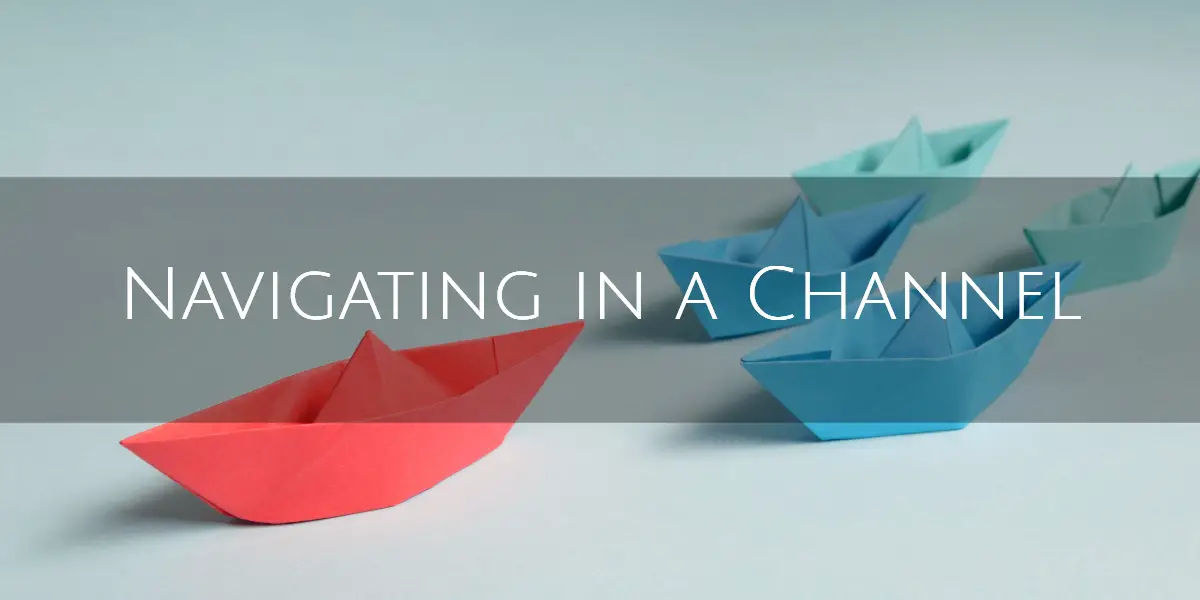 When navigating in narrow channels the systems of water flow and water pressure will be considerably increased. The ship will thus push water ahead of her and the surface of the water will rise noticeably several ship’s lengths ahead of the ship.

Along the ship’s side, water will flow back with higher velocity than in open water of the same depth and abaft of the ship, water will be pulled along in the direction the ship is sailing.

In order for the ship to be able to sail parallel to a channel bank, she must lie at a certain angle away from the channel bank and permanent rudder must be given towards it. In this way, a position of equilibrium may be obtained where rudder power and repulsion at the bows will neutralize the suction and where the total turning mon wit of the three forces about the centre of gravity of the ship are zero.
If the ship steams into a bend of a channel, the bank effect should be taken advantage of to assist the vessel’s rounding the bend. She should accordingly be placed on the outer side of the bend.

Correct position when passing a bend in a channel

If the ship is placed on the bank side of the bend, and if the ship goes into a turn on account of the bank effect, it will be difficult to avoid grounding on the other side of the channel. Resistance to headway is increased considerably when navigating in a narrow channel compared to navigating in the same depth of water in open water. This is due to the fact that there is a build-up of a somewhat higher water pressure on the ship’s bow and that the backward flow of water along the ship’s sides and the bottom is somewhat greater. If the engine power is increased the ship will attain a “saturation speed” where a continued increase of the engine power will not give increased speed. This “saturation speed” depends on the cross-sectional area of the channel compared to the frame areas of the ship. Also, the shape of the ship and the configuration of the channel are of significance.

In a channel of the “Box-type”, these forces greatly increase in magnitude. As an example, one can mention, that the saturation speed in a “Box-type” channel at some places can be given as below:

Correspondingly the ship will encounter considerable resistance to headway when putting into a dock or ferry-berth. This may be an advantage as it is possible to keep the propeller turning for a considerable time and thus maintain the effect of the rudder when entering such a dock or berth. Even at very low speed, say a maximum of 4 knots, the cushion-effect can still lead to
grounding.

Passage of two ships in a Narrow Channel

When a ship is navigating in a narrow channel she should for reasons given below keep to the centerline of the channel (except for cases where there is a bend in the channel).

If two ships on opposite courses are to pass each other in these conditions the ships should remain on the centre-line as they approach. The procedure should be as follows:

When the stern of the ships are abeam of each other, engine RPM is increased to full ahead and
the ships will move towards the centre line of the channel while the rudder is used to the extent that is necessary in order to bring them back to the centre line. The sequence of manoeuvres during this passage is a shown.(Figure 1, 2 and 3) 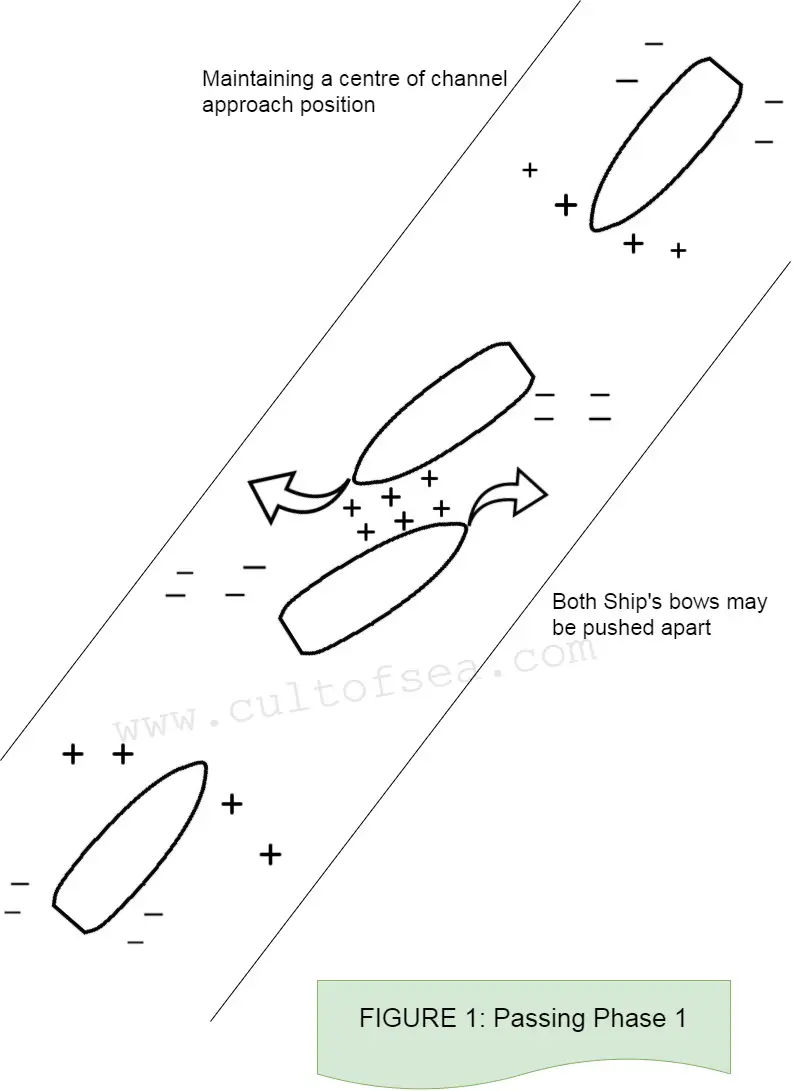 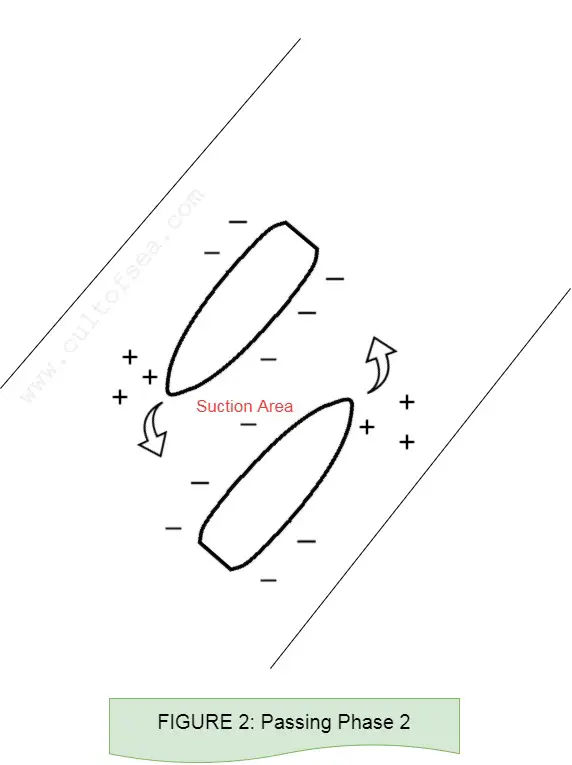 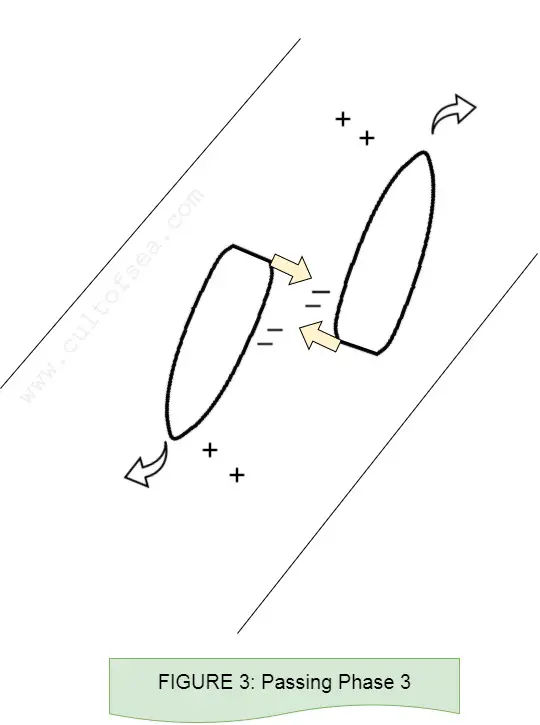 It might appear obvious to execute the passage in such a way that both ships move to the right of the centerline of the channel in good time and thus approach each other on a parallel course before passing each other. However, such a manoeuvre may have disastrous consequences in a narrow channel for one or both ships approaching each other should go into an uncontrolled turn to port due to channel bank effect.

Manoeuvring in a narrow channel in this way is therefore strongly warned against, although of course it may be executed in this way if the breadth of the channel is sufficiently large.

Overtaking in a narrow channel must naturally be performed at close quarters and for this reason, should as far as possible not be attempted. If it is executed, it is important that those in charge of both ships know what is happening so that they can carry out the correct and necessary manoeuvres on the rudder in good time.

These manoeuvres may be extremely dangerous, as the overtaken ship may go out of control on account of her reduced speed and consequential lesser rudder effectiveness. (Figure 4, 5 and 6) 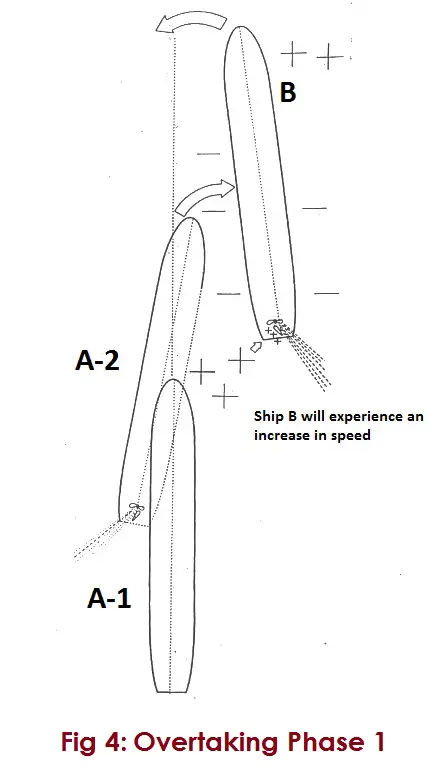 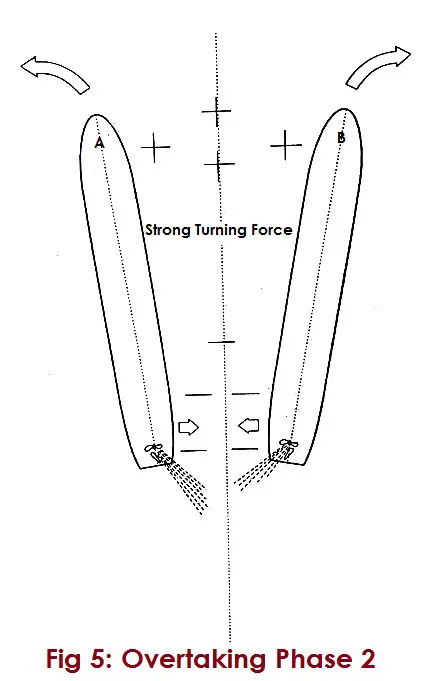 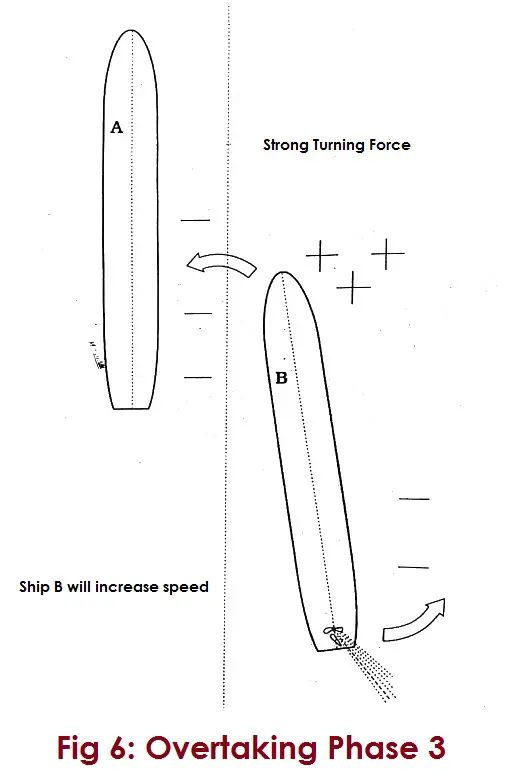 The effects on the overtaken ship may be very large at close quarters, and the overtaken ship may get out of control. How close the ships may approach each other depends on the speed, but distances between the ships of under a ship’s breadth must in all conditions be considered dangerous.The overtaking ship is, of course, also subjected to turning moments, but this ship will be considerably easier to keep under
control.
If the two ships are making almost the same speed, the ships reactions are slower and there is time enough to counteract them (that is if they can be counteracted). If the difference in speeds is large, the effects will change quickly so that the ships will not have time to go into a noticeable turn.The most dangerous situation, therefore, seems to be somewhere in between these two extremes. This situation cannot, of course, be determined exactly, but it appears that differences in speeds of 20-30% are especially dangerous. Generally a quick overtaking, i.e. at a large difference in speed, should be aimed at.