A propeller is a type of fan which generates an adequate thrust to propel a vessel at some design speed with some care taken in ensuring some “reasonable” propulsive efficiency. Considerations are made to match the engine’s power and shaft speed, as well as the size of the vessel and the ship’s operating speed, with an appropriately designed propeller. Generally, propellers are of two types – Fixed Pitch Propeller ( FPP) and Controllable or Variable Pitch Propeller ( CPP). 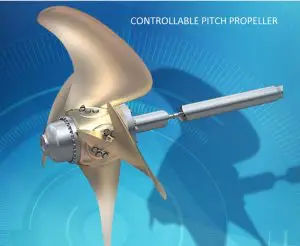 These propellers now have a relatively good track record for reliability and are becoming increasingly common in a wide range of tonnage. Unlike the fixed pitch propeller, the blades of these propellers can be altered, set whatever pitch is required, across the whole power band from full ahead to full astern. This is usually achieved with hydraulic pumps or pistons, the older mechanical systems being less able to cope with the size and speeds of the modern vessel. The hydraulic pumps themselves are activated by an electric motor, which is in turn operated by remote bridge control. This may be either pneumatic or electronic. In small craft and in some older systems the bridge control may be mechanical, using cables linked direct to hydraulic rams, but these are becoming increasingly rare.

To use a controllable pitch (CP) propeller the main engine has to be clutched in so that the propeller is continuously turning, usually at quite high revolutions. As it is neither practical nor economical, to run an engine continuously at excessively high rpm, it is important to have some sort of combined control over both rpm and pitch, so that the pitch for slow speeds is balanced with a reduction in revolutions.

On most ships this is achieved by installing a ‘combinator‘ which automatically balances engine revolutions against propeller pitch, thus producing a saving in fuel and better propeller performance.

To use ahead power, a ship with a CP propeller is not restricted to the stepped progression, through dead slow ahead to full ahead, that has for some, been long associated with fixed pitch propellers. Any speed can be selected, simply by adjusting the combinator control to the required setting. It is also possible to set the propeller pitch for extremely low speeds so that on these occasions when it is essential to proceed at very slow speeds, the propeller and rudder are still active and steerage way can be maintained for a lot longer than is usual. This is particularly advantageous if compared to the many ships with fixed pitched propellers, where the speed for dead slow ahead can sometimes be as high as five or six knots, due to excessive engine revolutions and/or stalling speed of the engine.

When ‘low speed’ or ‘stop’ are demanded, the blades of the CP propeller are set with a very fine angle and pitch, to the extent that when they are viewed from astern, they will appear to open like a fan and the propeller will look rather like a closed disc or wheel. If the ship’s speed is too high and does not already match the propeller speed, the flow of water through it will be restricted and a great deal of turbulence will develop behind the propeller, which will also have an adverse effect upon the rudder (see illustration below). 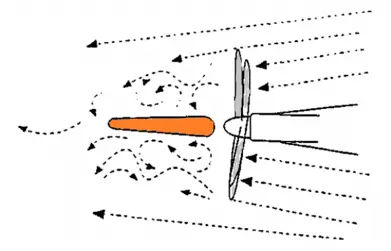 The rudder shielded with the propellers fine pitch setting

If therefore, the ship’s speed is not reduced slowly and progressively, in much the same way as a large directionally unstable ship, the rudder will be shielded and the steering may become erratic or poor.  Whilst it is irritating if the steering is poor, it should not be forgotten that CP propellers are instantly available for corrective ‘kicks ahead’, in a virtually unlimited supply, and are not liable to the restrictions that can be experienced with fixed pitch propellers, such as limited air supplies for starting the engine or delays whilst the engine is put astern.

Transverse Thrust One of the most common concerns mentioned by many officers, and quite rightly so, is the uncertainty as to which way the bow will cant, if at all when a controllable pitch (CP) propeller is put astern. This is also something the pilot needs to know when he comes on board. To answer this question, it is first necessary to know which way the propeller is turning when it is viewed from astern. With the majority of CP propellers, it is in an anti-clockwise direction and they are called left-handed. It is important, however when informed that a CP ship is left-handed, that it is not confused with a fixed pitch left-handed ship, because the CP propeller, it should be remembered, rotates the same way all the time. When the pitch is set for stern power, it is only the angle of the blades that has changed and the propeller is still rotating anticlockwise or left-handed. The effect is now similar to a fixed pitch right-handed propeller working astern. The flow of water through the propeller is directed up onto the starboard quarter and may be strong enough to thrust the stern to port so that the bow is seen to cant or ‘kick’ to starboard.

It is important to note that the transverse thrust on some ships with a CP propeller may be weak and unreliable, due to vortices or turbulence around the propeller blades. This is usually the result of specific design limitations and might, for example, occur when a CP propeller is designed to operate at slow speeds, with fine pitch settings, but high shaft revolutions. In another example, if the pitch is altered from ahead to astern, some of the inner or lower sections of the blades may be set at rather crude angles and this, too, can create vortices around the propeller. These characteristics can also have a detrimental effect on the maximum stern power available when compared to a similar ship with a fixed pitch propeller. It is, therefore, advisable to exercise some caution when anticipating the effects of stem power on some CP ships.

On some ships, due to an inferior design, age or poor maintenance, when the control stick on the bridge is positioned for a stop with zero pitch, the propeller might not be accurately aligned to the same setting and some residual thrust may still exist. Although with experience, a ship’s master can compensate for this error, it is still imperative to remember, that even though ‘stop’ has been requested, a ship with a CP propeller can unexpectedly creep ahead or astern. This is very important during the period prior to slipping from a berth, when the engine is started and the shaft is clutched in. If the ropes are not kept tight, particularly while singling up, the vessel may start to move along the dockside with serious consequences if other ships are tied up close ahead or astern. It is also noticeable on some ships that the CP propeller, which is constantly running with high revolutions, can pump quite a lot of water up onto the quarter and along the ship’s side, even with zero pitch set. In the case of a left-handed CP propeller, this water will be flowing along the starboard side.

If then, the ship is laying alongside a solid dockside starboard side and the ropes are slackened off, this can act like a tide flowing from astern and push the stern away from the dockside (see below). It can also make it very difficult to get the stern alongside when berthing, particularly when coming into a berth stern first and there has been a need to use stern power as well. This might not be resolved, until either a stern line is ashore and tight, or the revolutions are reduced.

The propeller size and design is dependent on the size of the vessel and type of operation. Most commonly used propellers on cargo vessels have four or five propeller blades, but six blades have been used. The propeller may have a diameter of more than nine metres and a weight of 130 tons. The most commonly used materials are stainless steel or a bronze alloy

These propellers are mounted on a propeller shaft that turns on “demand”. Speaking of its type, the blades on this type of propeller do not move and the pitch is fixed. The shaft changes the direction of its rotation to effect a motion either ahead or astern depending on the type of the blade.