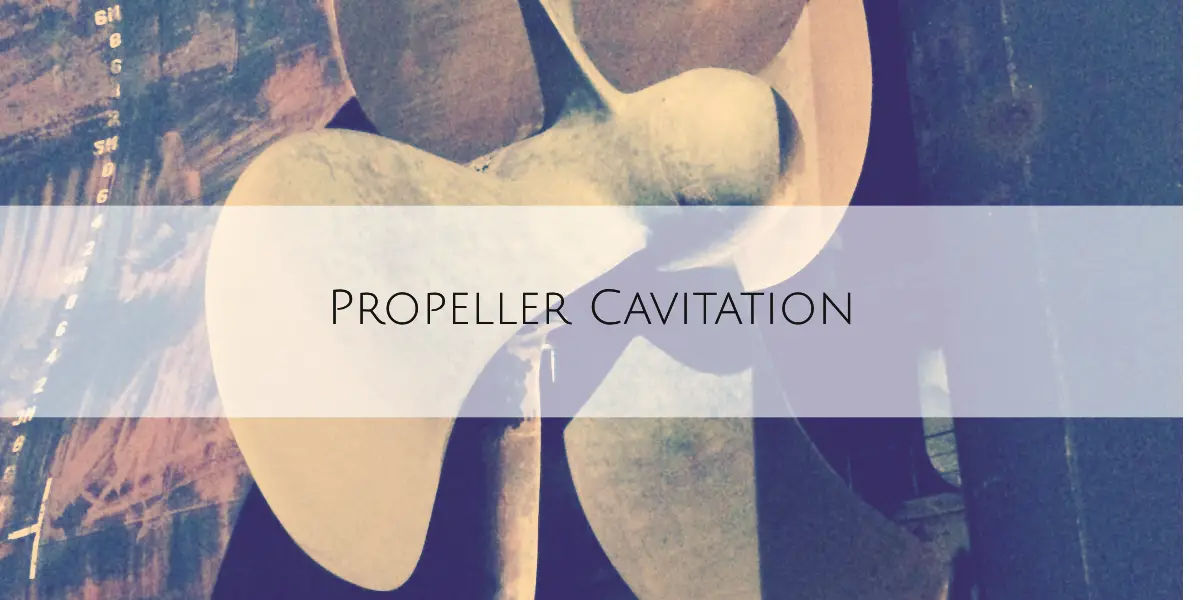 Cavitation of a ship’s propeller is phenomena that can greatly reduce a ship propelling efficiency whilst at the same time lead to rapid degradation of the propellor.

To learn further about cavitation, we need to get familiar or refresh our knowledge regarding Liquid vapour phases.

The phases of liquid and vapour are influenced by temperature and pressure. Water is normally observed to change its state to the form of vapour when its temperature is raised to above 100 deg C at atmospheric pressure. Water can also vaporise when the pressure is reduced under normal conditions of temperature. At physical sea temperatures, this requires a pressure less than approximately 1.5 to 2.0 kN/m2.

Cause of Propeller Cavitation

The blades of a propeller develop a total force in a certain direction by virtue of being set at a small angle of ‘incidence’ to the resultant direction of flow of water passing through the propeller. 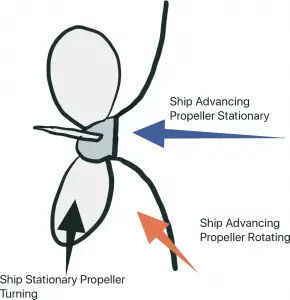 Relative Velocities of the Water

The effect of the flow past the blades is to cause a positive pressure on the face and a reduced pressure or suction on the back due to increased velocities of flow. This increased velocity is due to the shape of the propeller blade section. 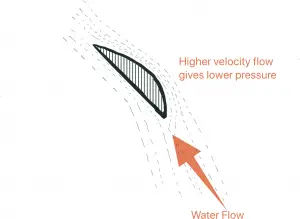 The sum total of these pressure distributions produces the total force whose axial component gives the propeller thrust force. It so happens that under normal working conditions of a ship’s propeller the suction force on the back of the blade represents about 80% of the total force. 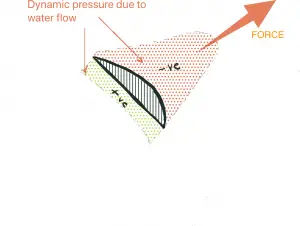 Dynamic Pressure due to water flow 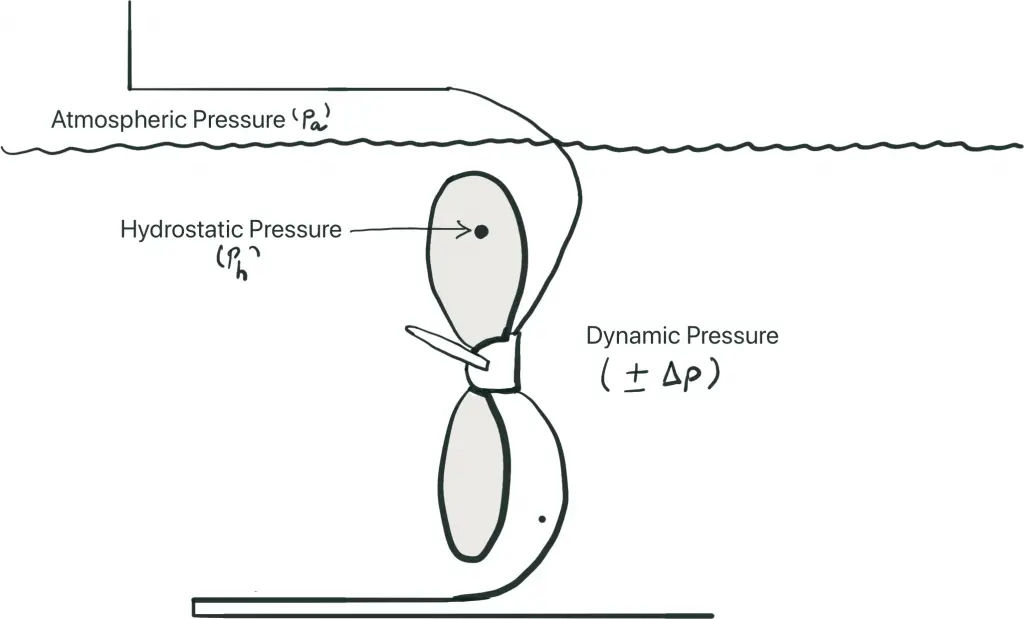 Net Pressure at a Given point

If net pressure reduces to a value below the vapour pressure 9e), then the water will vaporise and cavities will be formed. The creation of these cavities is known as cavitation.

This can only occur when Δp is sufficiently negative.

Since cavitation is affected by pressure and temperature, it is more likely to occur in propellers operating near the surface in warm waters. 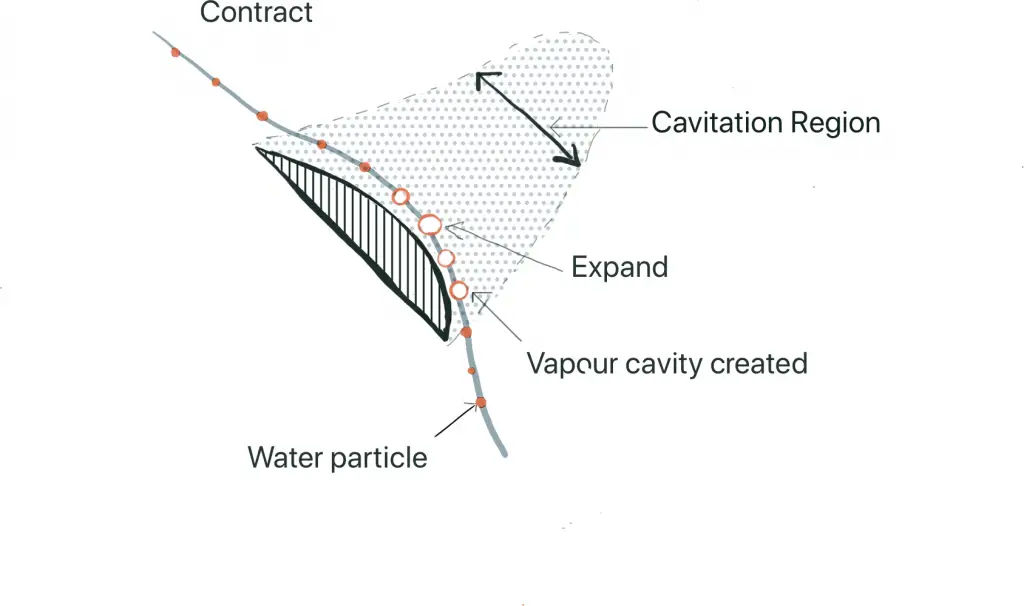 Cavitation increases with the higher loading of the blades, i.e. with larger angles of incidence or with different blade section shapes.

The effects of cavitation may be listed as :

The effects of cavitation on performance can be considerable. Cavitation usually starts at the blade tips and spread gradually over the entire blades as the propeller loading is increased. When cavitation has extended to about 0.75 of the radius it is found there is a considerable loss in thrust followed by a reduction in torque which means in practice that, there will be a marked increase in revolutions for a given power. Since the thrust breakdown proceeds more rapidly than the change in torque there can be a considerable loss in efficiency.

Erosion is a potentially serious effect. The cavitation bubbles, when formed, cannot persist if they are swept into a region where the net pressure returns to a value exceeding the vapour pressure of the water. This may occur towards the trailing edge of the blade or as the blade moves from the top to the bottom of the circle gaining hydrostatic pressure. The manner in which they collapse introduces a new phenomenon, the bubbles contract to a very minute size before they disappear and the whole of the energy of collapse & change of state is therefore concentrated to a very small area. It has been estimated that the final pressure at the point of collapse may exceed 2.3 x 109 N/m². This obviously has a serious effect on the surface of the metal of the blades which can be quickly eroded.

In the initial stages of the attack, the metal takes the appearance of having been struck rapidly with a small ‘peening’ hammer and minute circular indentations are seen on the surface marking the point of collapse of successive bubbles. If the cavitation is more extensive or persists for a longer period of time then it results in serious pitting corrosion of the metal causing a definite crater or series of craters in the surface of the blades, leaving the sponge-like appearance which is characteristics of advanced cavitation erosion.

The tips of the propeller blade and trailing edges are particularly susceptible to erosion and may be completely eroded and torn away by the effects of cavitation. In some instances the continual pitting cause the whole thickness of the blades to be eaten away and finally making a hole through the blade back to face.

Erosion due to cavitation may occur at any part of a propeller blade where the suction is high but in common over three significant regions:

Vibration is created due to the unsteady nature of the cavitation and is termed as the periodic deflection of the structure in a vertical, horizontal or torsional manner.

The collapsing cavities give rise to noise effects which, accompanied by high-frequency vibrations, can be extremely unpleasant to passengers and crew if they are situated in the aft end of ship accommodation.

A propeller is said to be fully cavitating when the whole of the back is covered in sheet cavitation. This phenomenon is also called super cavitation. After the back of the section has become completely denuded of water, the increase in revolutions per minute cannot reduce pressure there any more, and so no additional lift can be generated by the back. On the face, however, pressure continues to increase with higher revolutions and so does the total thrust, although at a slower rate than before cavitation began. – P. v. O. J.D. van Manen