You are here: Home / Safety / Port State Control (PSC) – An agreed regime for the inspection of foreign ships 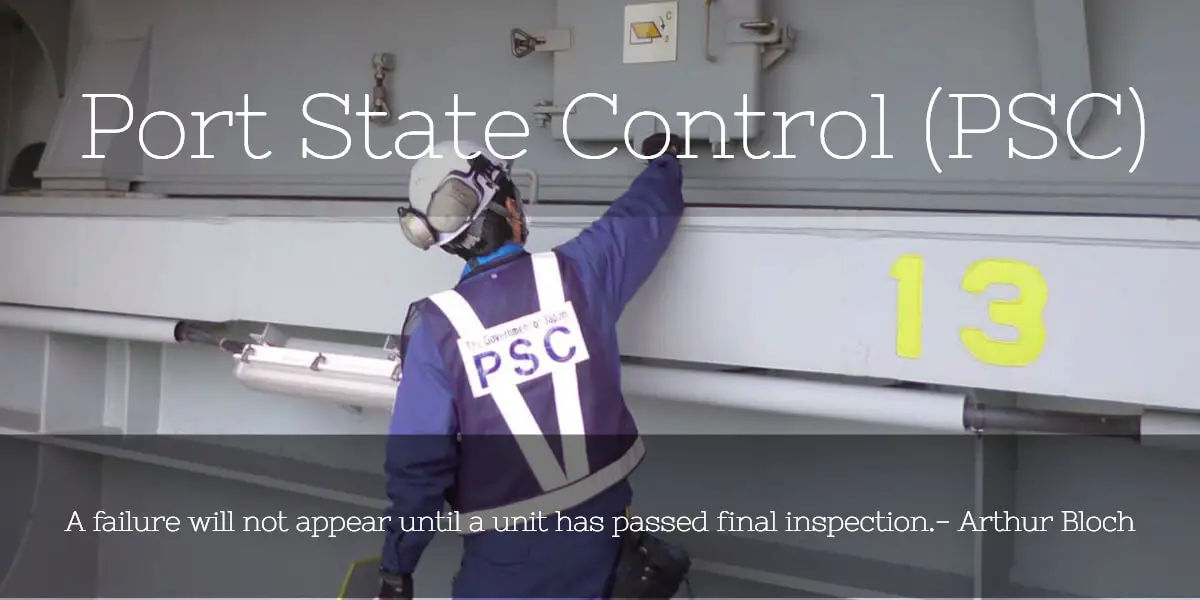 Port State Control (PSC) is the inspection of foreign ships present in a nation’s port for the purpose of verifying that the condition of the ships and their equipment comply with the provisions of international conventions and codes and that the ships are manned and operated in compliance with those provisions.

Many of IMO’s most important technical conventions contain provisions for ships to be inspected when they visit foreign ports to ensure that they meet IMO requirements.

These inspections were originally intended to be a back up to flag State implementation, but experience has shown that they can be extremely effective, especially if organized on a regional basis. A ship going to a port in one country will normally visit other countries in the region before embarking on its return voyage and it is to everybody’s advantage if inspections can be closely co-ordinated.
This ensures that as many ships as possible are inspected, but at the same time prevents ships being delayed by unnecessary inspections. The primary responsibility for ships standards rests with the flag state but Port State Control provides a “safety net” to catch sub-standard ships.

The primary responsibility for maintaining ships standard rests with the flag states, as well as their owners and masters. However, many flag states do not, for various reasons, fulfill their obligations under international maritime conventions, and PSC provides a useful “safety net” to catch substandard ships. PSC effectively does what the Flag State control should, but in many cases fails, to do.

In 1978 the ‘Hague Memorandum’ between a number of maritime authorities in Western Europe was developed. It dealt mainly with enforcement of shipboard living and working conditions as required by ILO Convention no. 147.

However just as the memorandum was about to come into effect in March 1978 a massive oil spill occurred off the coast of Brittany (France) as a result of the grounding of the VLCC ‘Amoco Cadiz’.

This incident caused a strong political and public outcry in Europe for far more stringent regulations with regard to the safety of shipping. This pressure resulted in a more comprehensive memorandum which covered:

Subsequently, a new Memorandum of Understanding on Port State Control was signed in January 1982 by fourteen European countries at a Ministerial Conference held in Paris, France. It entered into operation on 1 July 1982.

Since that date, the Paris Memorandum has been amended several times to accommodate new safety and marine environment requirements stemming from the International Maritime Organization (IMO) and requirements related to working and living conditions of seafarers.

The organization expanded to twenty-seven member States over the past years.

Nine regional agreements on port State control – Memoranda of Understanding or MoUs – have been signed:

Who boards a ship to carry out Port State Control inspection?

A Port State Control Officer (PSCO) carries out port State control. The PSCO is a properly qualified person, authorized to carry out port State control inspections in accordance with the MoU, by the Maritime Authority of the port State and acts under its responsibility. All PSCO’s carry an identity card, issued by their maritime authorities.

The object of this Code is to assist PSCOs in conducting their inspections to the highest professional level. Port State Control Officers are central to achieving the aims of the MOU. They are the daily contact of the MOU with the shipping world. They are expected to act within the law, within the rules of their Government and in a fair, open, impartial and consistent manner. 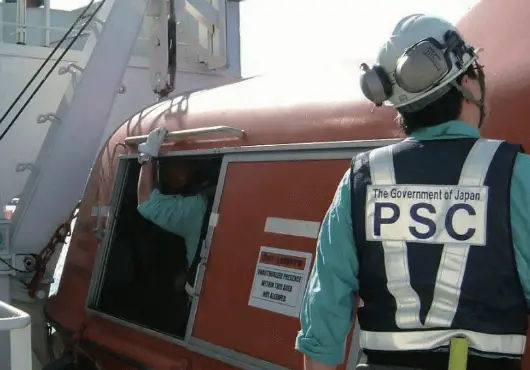 If deficiencies are found the PSCO must:

In principle, all deficiencies should be rectified before the departure of the ship. This does not
mean that every deficiency must be checked as rectified by the PSCO.

Fundamental Principles of the Code

The Code of Good Practice encompasses three fundamental principles against which all actions of PSCOs are judged: integrity, professionalism, and transparency. These are defined as follows:

Please find Code of Good Practice as per Paris MOU.

If there are other conditions, it must be specified. Ships above 13 years are to be in the overall targeting factor of PSC.

Certificates and Documents are to be inspected for the PSC

Detention of Ships under PSC code

Where a ship in port appears to be dangerously unsafe or in the case of deficiencies which are clearly hazardous to safety, health or the environment, she can be detained.
When a ship is in clear contravention with the IMO codes or the health and the well-being of the people on board is in danger, she can be detained. Pollution offenses would also detain the ship.

When deciding whether the deficiencies found in a ship are sufficiently serious to merit detention the PSCO will assess whether:

If the result of any of these assessments is negative, taking into account all deficiencies found, the ship will be strongly considered for detention. A combination of deficiencies of a less serious nature may also warrant the detention of the ship.

To assist the PSCO in the use of the procedures follows a list of deficiencies, grouped under relevant Conventions and/or Codes, which are considered of such a serious nature that they may warrant the detention of the ship involved. This list is not considered exhaustive but is intended to give an exemplification of relevant items:

The lack of valid certificates and documents as required by the relevant instruments.

Areas under the IBC Code

Areas under the IGC Code

Areas under Annex I to MARPOL

Areas under Annex II to MARPOL

Areas under Annex III to MARPOL

Areas under Annex IV to MARPOL

Areas under Annex V to MARPOL

Areas under Annex VI to MARPOL

As per Guidelines for port State control inspections for compliance with Annex VI of MARPOL regulations for the prevention of air pollutions from ships.

As per Guidance for inspection on Maritime Labour Convention, 2006 and Guideline for the Port State Control Officer on the inspection of hours of work/rest and fitness for duty. 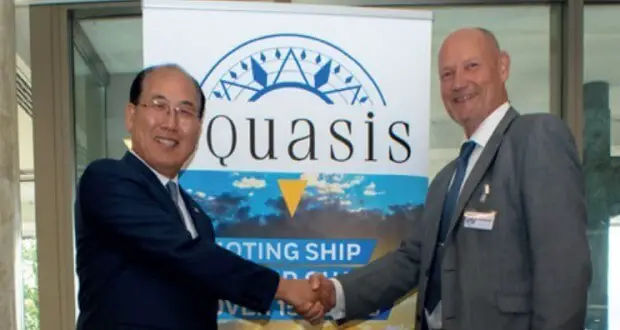 Equasis is a database holding safety-related details of more than 87,233 ships (as of 2015 – Source), including a record of port state control inspections. It is on the Internet and may be viewed by any member of the public.

Equasis aims at collecting and disseminating high quality, safety-related information on the world’s merchant fleet that has been provided by the holders of such information. Equasis believes that, by providing factual information, its users will be able to build their own opinions on ships and/or companies and act accordingly.

Equasis displays information from public authorities and industry organizations, and the whole list of the present providers is available under the menu tab ‘Providers’. Even though data is regularly updated in order to help ensure that information remains as reliable as possible, Equasis does not aim to be or to become a “real-time” system. The frequency of updates varies from provider to provider, whereby 80% of the data contained in Equasis is refreshed on a weekly basis.

The main principles behind the Equasis information system are that:

The role of the industry in promoting quality and safety in marine transport was at the heart of the Quality Shipping Campaign, launched by the European Commission and the UK Government in November 1997. The Campaign’s aim was to bring together all players involved in the various fields of marine business in an effort to improve maritime safety. It was based on dialogue between all the marine industry and public authorities and its tools were, primarily, voluntary measures. As the Quality Shipping Campaign demonstrated, one of the greatest impediments to a genuine quality culture in shipping is the lack of transparency in the information relating to the quality of ships and their operators.

While much relevant information is collected and available, it is scattered and often difficult to access. One of the main conclusions of the Quality Shipping Conference in Lisbon in June 1998, was a unanimous call from the participants representing the whole range of industry professionals (including shipowners, cargo owners, insurers, brokers, classification societies, agents, ports, and terminals), to make such information more accessible.

In response to this call, the European Commission and the French Maritime Administration decided to cooperate in developing an information system which collates existing safety-related information on ships from both public and private sources and makes it available on the Internet.

The Supervisory Committee decides and finances the Equasis project, and its composition aims to ensure an appropriate geographical spread. Equasis is therefore financed exclusively by public money and is made available to all users worldwide, free of charge. Those two characteristics are unique in the maritime world and give Equasis a special role in the marine industry.

At the moment, the members of the Supervisory Committee are as follows:

In the past, Equasis also benefited from the participation of the following maritime authorities:

Further Articles that may interest you:

What is ALARP and why do you need to know it?