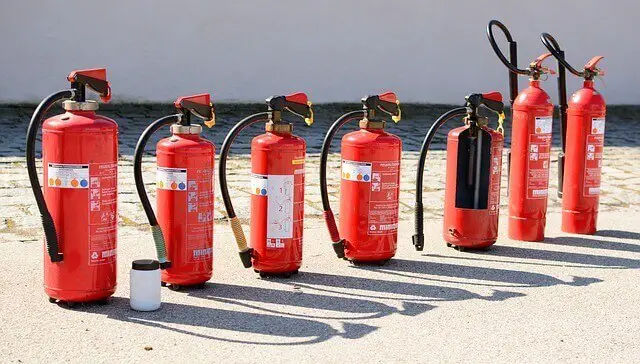 The Nature of Fire:

Fire is a chemical reaction known as combustion which occurs when fuel and oxygen are brought together with sufficient heat to cause ignition. A fire cannot start , or continue, if one side of the fuel-oxygen-heat triangle is absent, or if there is an interruption in the chemical chain reaction that sustains burning. 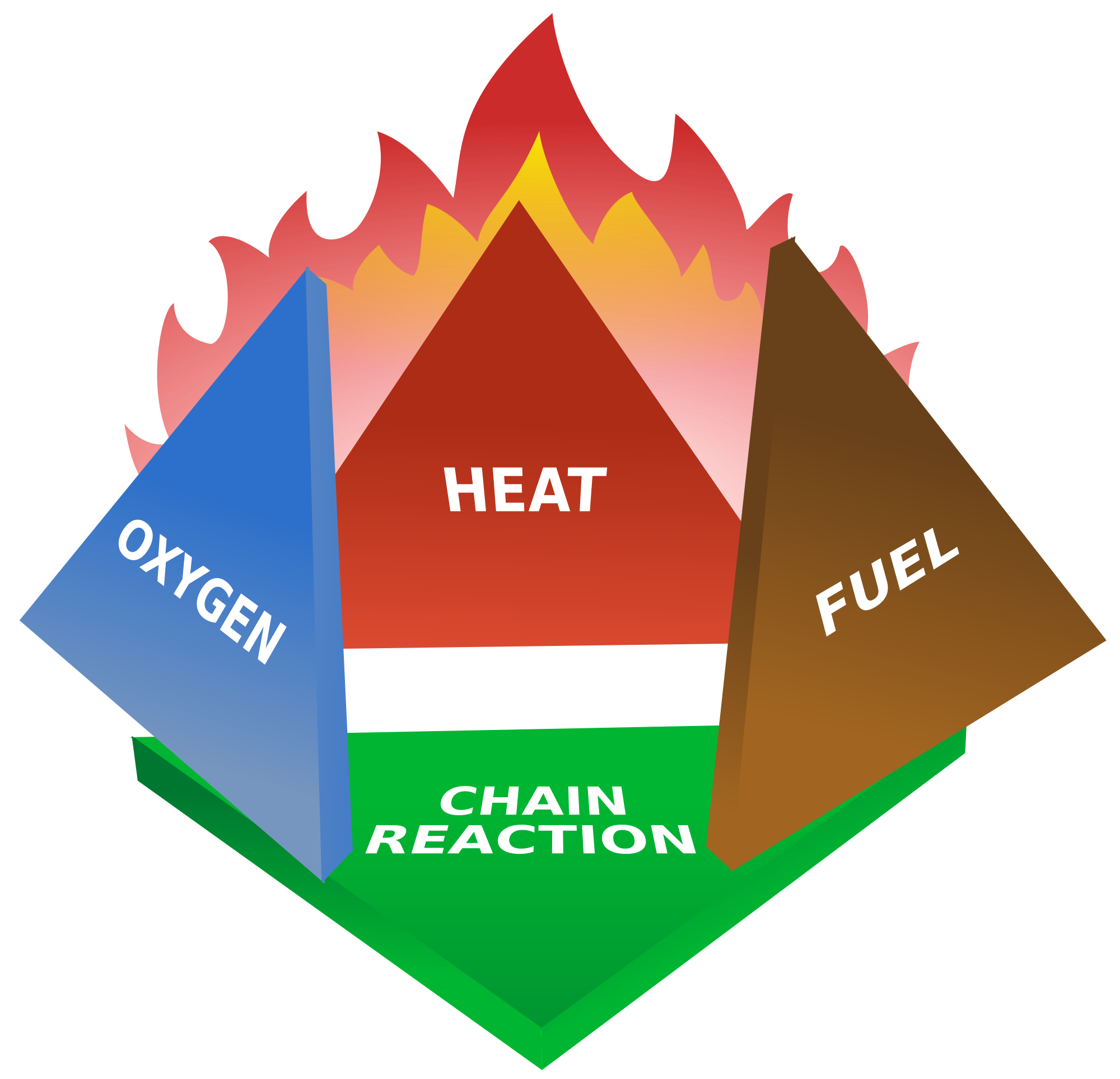 Oxygen, heat and fuel are frequently referred to as “fire triangle”. Add in the fourth element, the chemical reaction and you actually have a fire. The important thing to remember is: remove one of these elements and you will not have a fire or the fire will be extinguished.

When dealing with a fire, it is important to recognize its type as the correct treatment of one type of fire applied to another type may only increase the danger.

Fires which are fueled by materials that when they burn, leave a residue in form of ash. Fires in ordinary combustible materials such as wood, cloth, paper, rubber and many plastics.

Fires that involve metals, such as magnesium, sodium, titanium, and certain organ metallic compounds such as alkyl lithium.

Fires that involve energized electrical wiring or equipment ( motors, computers, panel boxes).  Note that if the electricity to the equipment is cut, a  fire becomes one of the other types of fires. Electricity itself does not burn. Any fire which is referred to as an electrical fire would actually be a Class A, B , C or D fire as described above, but with the additional hazard of live electrical circuits. Once the appropriate electrical circuits have been isolate the fire is treated as normal for its class.

An extinguisher is an appliance containing an extinguishing medium, which can be expelled by the action of internal pressure and be directed into a fire. This pressure may be stored pressure or be obtained by release of gas from a cartridge.
A portable extinguisher is one which is designed to be carried and operated by hand, and which in working order has a total weight of not more than 23kg.
Extinguishing medium is the substance contained in the extinguisher which is discharged to cause extinction of fire.

Extinguishers containing water, foam or dry powder will be similar in appearance, except that they may be color coded so that they may be easily identified. In each replica watches case medium is stored in a welded container. When the valve is opened, CO2 gas exerts a downward pressure on the water, foam or dry powder, forcing it up a siphon tube and out through the delivery hose. The discharge may then be controlled by squeezing and releasing the operating head valve.

Extinguishers where the medium itself is CO2, the gas is stored as a liquid under pressure. Due to pressure involved CO2 extinguishers are not welded containers but solid draw. Upon discharge the liquid expands into CO2 gas.rolex watches replica swiss movement

Halon is stored as a liquid under pressure, but not as such high pressure as CO2. Therefore it is not cold on discharge. Most portable halon extinguishers are manufactured from solid draw tube. Halon 1211 (known as BCF) is discharged as a liquid which can be sprayed at the fire with some direction. ( In 1989, when the Montreal Protocol determined that halon depleted the ozone layer, and the U.S. Environmental Protection Agency subsequently banned its manufacture in 1994, the search was on for halon replacement options)

Various Types of extinguishers and their usage

Dry Chemical Powder extinguishers are usually rated for multiple purpose use. They contain an extinguishing agent and use compressed, non-flammable gas as a propellant. They can be used on FLAMMABLE SOLIDS (such as paper, wood, plastic etc) FLAMMABLE LIQUIDS and FLAMMABLE GASES (but it is NOT usual to extinguish the flame of a gas fire).  Also safe on LIVE ELECTRICAL EQUIPMENT. 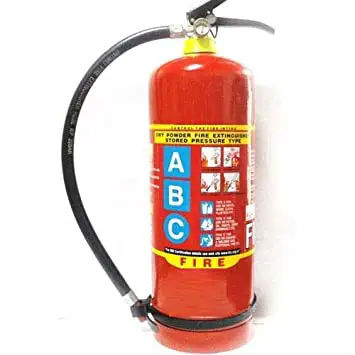 Halon extinguishers contain a gas that interrupts the chemical reaction that takes place when fuels burn. These types of extinguishers are often used to protect valuable electrical equipment since they leave no residue to clean up. Halon extinguishers have a limited range usually 1.2-1.8m. The initial application of Halon should be made at the base of the fire, even after the flames have been extinguished. 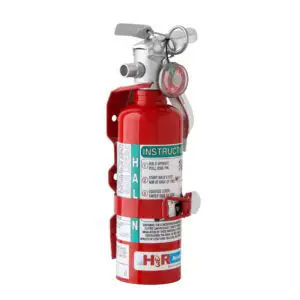 Water extinguisher contains water and compressed gas and should be only used on Class A fires. 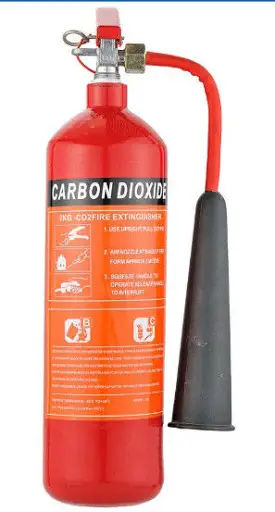 Foam spray extinguisher is ideal for the multi-risk situation were both classes A and class B risks are likely to be found. Spray foam extinguishers provide a fast, powerful means of tackling flammable liquids. The foam forms a seal over the surface to prevent re-ignition. 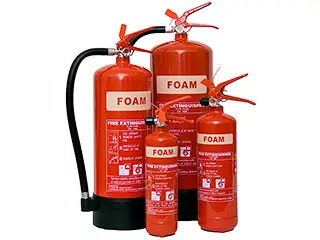 Wet chemical extinguishers are designed for use on Class F fires involving cooking oils and fats, such as lard, olive oil, sunflower oil, maize oil and butter. It is extremely effective as the wet chemical rapidly knocks the flames out, cools the burning oil and chemically reacts to form a soap-like solution, sealing the surface and preventing re-ignition. Independent fire tests have established that it is capable of extinguishing a fire in a deep fat fryer. The extinguisher is easy to use producing a gentle but highly effective spray. The gentle application helps prevent hot oil splashing onto the user. An added benefit is that they are also suitable for use on free burning materials (Class A) such as wood paper and fabrics. 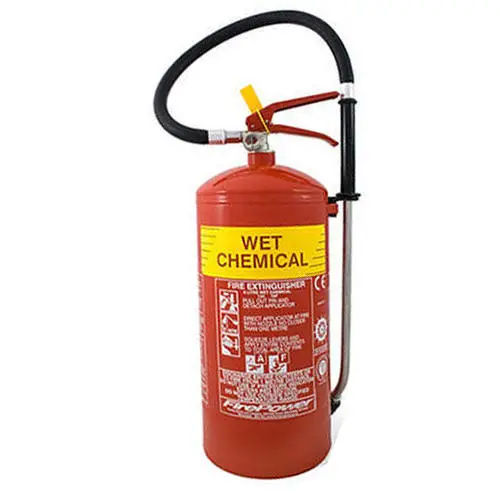 Construction of an extinguisher should be designed and manufactured for simple and rapid operation and ease for handling.

Each extinguisher should be clearly marked with the following minimum information:

Extinguishers should be subject to periodical inspections in accordance with the manufacturers instructions and serviced at intervals not exceeding one year. 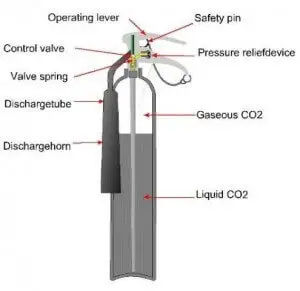 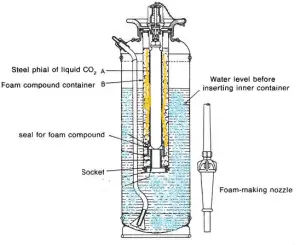