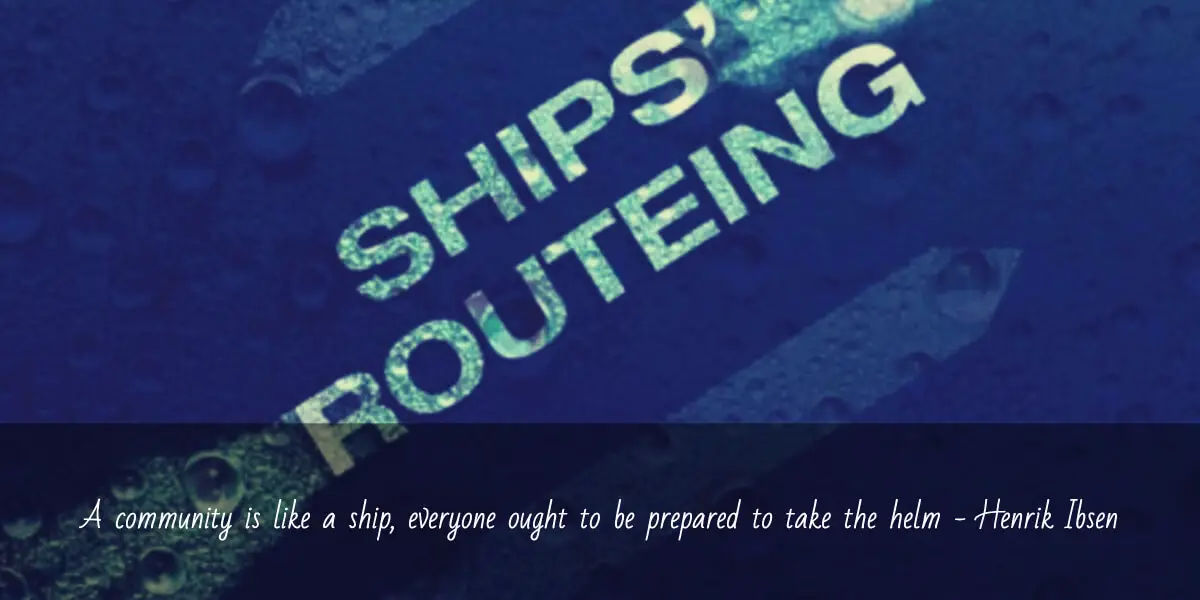 The purpose of ship’s routeing is to improve the safety of navigation in converging areas and in areas where the density of traffic is great or where freedom of movement of shipping is inhibited by restricted sea room, the existence of obstruction to navigation, limited depths or unfavorable meteorological conditions.

The objectives of any routeing system will depend upon the particular hazardous circumstances which it is intended to alleviate, but may include some or all of the following:

1. The separation of opposing streams of traffic so as to reduce the incidence of head-on encounters

2. The reduction of dangers of collision between crossing traffic and shipping in established traffic lanes.

3. The. simplification of the patterns of traffic flows in converging areas.

4. The organization of safe traffic flow in areas of concentrated offshore exploration or exploitation.

5. The organization of traffic flow in or around areas where navigation by all ships or by certain classes of ships is dangerous or undesirable.

6. The reduction of risk of grounding to providing special guidance to vessels in areas where water depths are uncertain or critical.

Any system of one or more routes or routeing measures aimed at reducing the risk of casualties, it includes traffic separation schemes, two-way routes, recommended tracks, areas to be avoided, inshore traffic zones, roundabouts, precautionary areas and deep water routes.

1. A ship navigating in or near a traffic separation scheme adopted by IMO shall, in particular, comply with Rule 10 of collision regulation.

2. At junction points where traffic from various directions meets, a true separation of traffic is not really possible, as ships may need to cross routes or change to another route. Ships should, therefore, navigate with great caution in such areas and be aware that a ship is proceeding along a through going-route gives that ships no special privilege or right of way.

3. A deep water route is primarily intended for use by ships which, because of their draught in relation to the available depth of water in the area concerned, require the use of such a route. Through traffic to which the above consideration does not apply should, as far as practicable, avoid using deep water routes.

4. Precautionary areas should be avoided, if practicable, by passing ships not making use of the associated traffic separation schemes or deep water routes, or entering or leaving adjacent ports.

5. In two-way routes, including two-way deep water routes, ships should as far as practicable keep to the starboard side.

6. Arrows printed on charts in connection with routeing systems indicate the general direction of established or recommended traffic flow; ships need not set their courses strictly along the arrows. 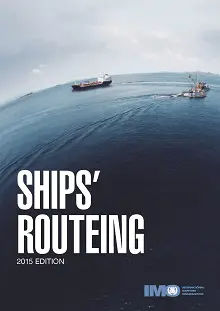 1. Routes should follow as closely as possible the existing patterns of traffic flow in areas as determined by traffic surveys.

2. The configuration and length of routeing systems which are established to provide for an unobstructed passage through offshore exploration and exploitation areas may differ from the dimensions of normally established systems if the purpose of safeguarding a clear passage warrants such a special feature.

3. Course alteration along a route should be as few as possible should be avoided in the approaches to convergence areas and route junctions or where crossing traffic may be expected to be heavy.

4. The number of convergence areas and route junctions should be kept to a minimum and should be as widely separated from each other as possible. Adjacent traffic separation schemes should be placed such that nearly opposing streams of traffic in the adjacent schemes are separated as widely as possible. Route junction should not be located where concentrated crossing traffic, not following established routes, may be expected, eg. Ferry traffic.

5. Routes should be designed to allow optimum use of aids to navigation in the area and of such shipborne navigational aids as are required or recommended to be fitted by international conventions or by IMO .resolutions and recommendations.

6. The extent of traffic separation scheme should be limited to what is essential in the interests of safe navigation.

7. Traffic lanes should be designed to make optimum use of available depths of water and the safely navigable areas taking into account the maximum depth of water attainable along the route. The width of lanes should take account of the traffic density, the general usage of the area and of the sea room available.

8. Where there is sufficient space, separation zones should be used in preference to separation lines to separate opposing streams of traffic and to segregate inshore traffic zones from adjacent traffic lanes.

10. The minimum widths of traffic lanes and of traffic separation zones should be related to the accuracy of the available position fixing methods, accepting the appropriate performance standards for shipborne equipment as set out in IMO resolutions and recommendations.

11. Where space allows the use of traffic separation zones the width of the zone should, if possible, be not less than three times the transverse component of the standard error of the most appropriate of the fixing methods listed in paragraph 6.10. where necessary and practicable, additional separation should be provided so as to ensure that there will be adequate early indication that traffic proceeding in the opposite direction will pass on the correct side.

12. If there is doubt as to ships being able to fix their positions positively and without ambiguity in relation to separation lines or zones, serious consideration should be given to providing adequate marking by buoys.

13. Whichever of the several available routeing methods is chosen for use at a route junction or in a converging area, it must be a cardinal principle that any ambiguity or possible source of confusion in the application of the collision regulations must be avoided. This principle should be

particularly borne in mind when establishing or recommending the direction of traffic flow in such areas. 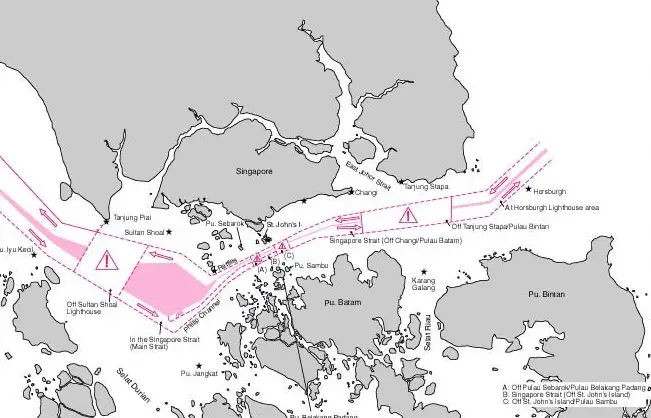 1. Reports should contain only information essential to achieving the objectives of the system.

2. Reports should be simple and use the standard international ships reporting format and procedures. Where language difficulties may exist, the languages used should include English, using where possible the standard marine navigational vocabulary, or alternatively The International code of signals.

3. The number of reports should be kept to a minimum

4. No charge should be made for communication of reports

5. Safety or Pollution related reports should be made without delay, however, the time and place of making non-urgent reports should be sufficiently flexible to avoid interference with essential navigational duties.

6. Information obtained from the system should be made available to other systems when required for distress, safety and pollution purposes.

7. Basic information – ships particulars, on board facilities and equipment, etc should be reported once, be retained in the system and updated by the ship when changes occur in the basic information reported.

8. The purpose of the system should be dearly defined.

9. Governments establishing a ship reporting system notify mariners of full details of the requirements to be met and procedures to be followed. Details of types of ships and areas of applicability, of times and geographical positions for submitting reports, of Shore establishments responsible for the operation of the system and of the services provided should be clearly specified. Chart lets depicting boundaries of the system and providing other necessary information should be made available to the mariner.

11. Governments should ensure that shore establishments responsible for operation of the system are manned by properly trained persons

12. Governments should consider the interrelationship between ship reporting systems and other systems.

13. Ship reporting systems should preferably use a single operating radio frequency, where additional frequencies are necessary; the number of frequencies should be restricted to the minimum required for the effective operation of the system.

14. Information provided by the system to ships should be restricted to that necessary for the proper operation of the system and for safety.

15. Ship reporting systems and requirements should provide for special reports from ships concerning defects or deficiencies with respect to their hull, machinery, equipment or manning, or concern other limitations which could adversely affect navigation and for special reports concerning incidents of actual or probable marine pollution.

16. Governments should issue instructions to their shore establishments responsible for the operation of ship reporting systems to ensure that any reports involving pollution, actual or probable, relayed without delay to the officer or agency nominated to receive and process such reports, and to ensure that such an officer or agency relays these reports without delay to the flag state of the ship involved and to any other state which may be affected.

17. States which are affected or likely to be affected by pollution incidents and may require information relevant to the incident should take into account the circumstances in which, laced, and should endeavour to limit their requests for additional information.

What is a YG Signal?

The signal YG meaning, you appear not to be complying with the traffic separation scheme is provided in the international code of signals for appropriate use.

Ships’ routeing systems contribute to the safety of life at sea, safety, and efficiency of navigation and/or protection of the marine environment. Ships’ routeing systems are recommended for use by, and may be made mandatory for, all ships, certain categories of ships or ships carrying certain cargoes, when adopted and implemented in accordance with the guidelines and criteria developed by the Organization.*

The initiation of action for establishing a ships’ routeing system is the responsibility of the Government or Governments concerned. In developing such systems for adoption by the Organization, the guidelines and criteria developed by the Organization shall be taken into account.

Where two or more Governments have a common interest in a particular area, they should formulate joint proposals for the delineation and use of a routeing system therein on the basis of an agreement between them. Upon receipt of such proposal and before proceeding with consideration of it for adoption, the Organization shall ensure details of the proposal are disseminated to the Governments which have a common interest in the area, including countries in the vicinity of the proposed ships’ routeing system’

A ship shall use a mandatory ships’ routeing system adopted by the Organization as required for its category or cargo carried and in accordance with the relevant provisions in force unless there are compelling reasons not to use a particular ships’ routeing system. Any such reason shall be recorded in the ships’ log.

Mandatory ships’ routeing systems shall be reviewed by the Contracting Government or Governments concerned in accordance with the guidelines and criteria developed by the Organization.

All adopted ships’ routeing systems and actions are taken to enforce compliance with those systems shall be consistent with international law, including the relevant provisions of the 1982 United Nations Convention on the Law of the Sea. Nothing in this regulation nor its associated guidelines and criteria shall prejudice the rights and duties of Governments under international law or the legal regimes of straits used for international navigation and archipelagic sea lanes.