You are here: Home / Navigation / Passage Planning in or near ice limit 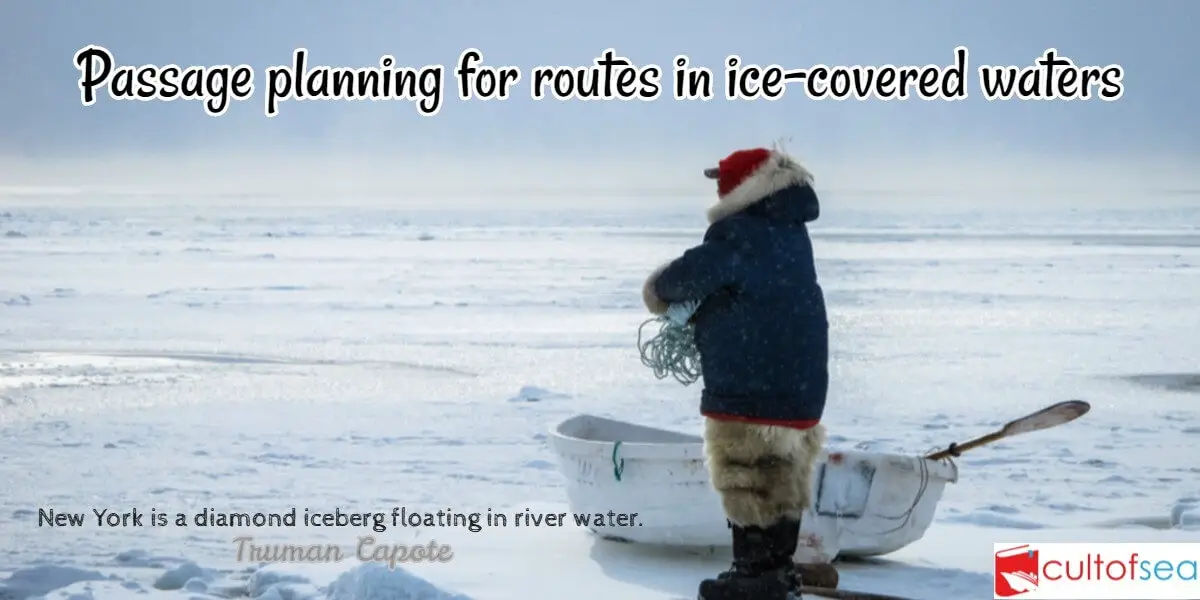 Passage planning for routes in ice-covered waters is based on standard navigational principles for passage planning(International Maritime Organization Resolution A. 893(21) adopted on 25 November 1999, Guidelines For Voyage Planning.

The procedure involves the use of all information sources used in open water passage planning, plus any others that can be obtained to give a complete picture of the ice conditions possible. Check to determine the availability of Canadian Ice Service ice information from Canadian Coast Guard Marine Communications and Traffic Services Centres and from the internet websites where ice information is freely available EC.QC.QA  and MARINFO.

Strategic planning is a forward-looking exercise to assess the ice conditions the vessel is likely to encounter along the length of its planned route. Strategic planning relies on weather forecasts and available publications on the ice climatology of the region to be encountered in addition to standard nautical publications. This exercise may be planned over a period of hours, days, or even months depending on the route, destination and the nature of the ice environment to be encountered.

NOTE: For ships that are not ice-strengthened and will be following ice instructions from the Canadian Coast Guard Ice Operations Centre, the work at this point is the same as for a conventional voyage.

Master will develop a route to the destination based on the information obtained in the Appraisal phase, and have this laid off on the appropriate charts. The principles involved will be the same as in open water passage planning. The plan should be developed with the following limitations of the elements of the Ice Navigation system in mind:

The planning of the passage has been completed, the tactics for its execution can be decided upon. The estimated time of arrival for the destination can be developed based on the ice conditions expected along the route. Take into account any expected reductions in speed or large deviations in the course for reduced visibility, passages in consolidated ice, areas of higher concentrations of old ice, and delays in waiting for information. The point at which it is considered necessary to ballast down to ice draft and to reduce speed should also be considered.

Consider when extra lookouts will be required or when watches are likely to double for entering ice or approaching areas of low visibility or high numbers of icebergs/bergy bits/growlers.

Monitoring of the route should continue until the ice-covered areas are reached. As the ship approaches ice-covered waters, the quality and quantity of ice information improve (with Canadian Ice Service ice analyses and forecasts), which increases the accuracy of estimates for times of arrival and may perhaps indicate a change in route.

The strategic evaluation may be redone, once or several times, on approach to the ice, depending on the amount of new information received.

If no detailed ice information is available before reaching the ice-covered area, the ship may be limited to the strategically planned route rather than a tactical one. All efforts should be made to obtain detailed information on ice conditions, particularly when consolidated ice is likely to be encountered, where high concentrations of old ice are expected or in highly mobile ice.

The gathering of tactical information is based mainly (but not exclusively) on the acquisition of Canadian Ice Service ice observation and analysis charts. The reception of these charts depends on the ship being fitted with a facsimile

machine capable of being tuned to the required frequencies. Additional inputs consist of marine radar (X and S-bands), visual observations, and processed radar imagery. Ice charts can be downloaded from the Canadian Ice Service website on the Internet where satellite telephone contact is available. Helicopter (visual) reconnaissance can also be valuable where available.

Planning may be as for open water on large-scale charts, but also, if the further information has been obtained, this may involve a track planned on a small-scale chart. Planning with additional information entails laying off the route to take the best advantage of optimum ice conditions, including:

Once the track has been laid out, it has to be transferred to large-scale charts and checked for adequate water depth. The two sources have to be reconciled so that the best route is also a safe route. Once the route has been laid out it may indicate the need for further information.

Once the route has been determined, estimated times of arrival can be revised. Any change in weather conditions, particularly visibility or wind direction and speed, should be considered before executing the plan, as they are important for estimating pressure areas or where open water leads may be located.

Related Article:   Precautions while Entering and Navigating within Ice Limits

Progress should be monitored on the chart by conventional means and ice navigation can continue.