You are here: Home / Navigation / Amplitude

The Amplitude of a body is the angle at the observer’s zenith or the arc of his rational horizon contained between the observer’s prime vertical and the vertical circle through the body, at theoretical rising or setting.

When observing the amplitude of a body, its centre should be on the rational horizon, that is, its true altitude should be exactly 0° which implies that its zenith distance will be exactly 90°. 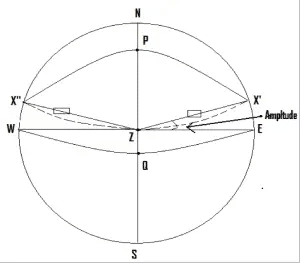 When the declination of the sun remains unchanged between rising and setting, the true amplitude at rising should equal the true amplitude at setting. Therefore sum of the true rising bearing and true setting bearing is always equal to 360°. The mean between the two bearings will therefore always be equal to 180°. The difference between 180° and the mean of the two compass bearings will therefore give the error. 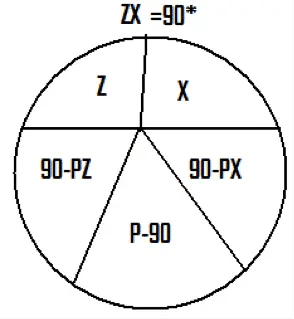