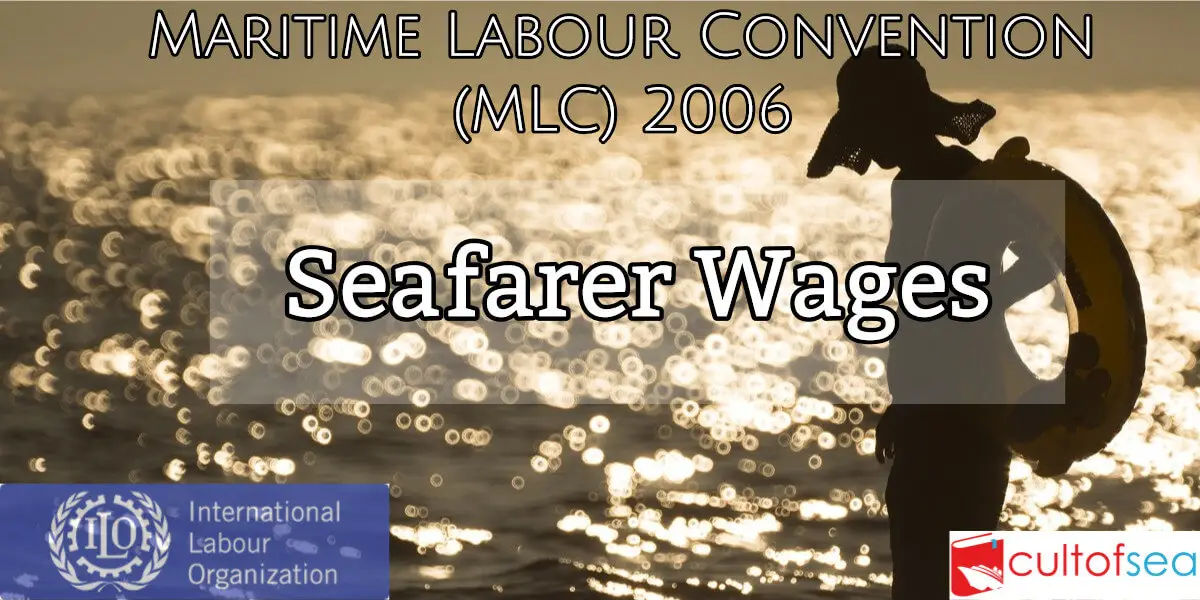 Purpose: To ensure that seafarers are paid for their services

1. All seafarers shall be paid for their work regularly and in full in accordance with their employment agreements.

1. Each Member shall require that payments due to seafarers working on ships that fly its flag are made at no greater than monthly intervals and in accordance with any applicable collective agreement.

2. Seafarers shall be given a monthly account of the payments due and the amounts paid, including wages, additional payments and the rate of exchange used where payment has been made in a currency or at a rate different from the one agreed to.

3. Each Member shall require that shipowners take measures to provide seafarers with a means to transmit all or part of their earnings to their families or dependents or legal beneficiaries.

4. Measures to ensure that seafarers are able to transmit their earnings to their families include:
(a) a system for enabling seafarers, at the time of their entering employment or during it, to allot, if they so desire, a proportion of their wages for remittance at regular intervals to their families by bank transfers or similar means;
(b) a requirement that allotments should be remitted in due time and directly to the person or persons nominated by the seafarers.

5. Any charge for the service shall be reasonable in amount, and the rate of currency exchange, unless otherwise provided, shall, in accordance with national laws or regulations, be at the prevailing market rate or the official published rate and not unfavourable to the seafarer.

(a) able seafarer means any seafarer who is deemed competent to perform any duty which may be required for a rating serving in the deck department, other than the duties of a supervisory or specialist rating, or who is defined as such by national laws, regulations or practice, or by collective agreement;
(b) basic pay or wages means the pay, however, composed, for normal hours of work;
it does not include payments for overtime worked, bonuses, allowances, paid leave or any other additional remuneration;
(c) consolidated wage means a wage or salary which includes the basic pay and other
pay-related benefits; a consolidated wage may include compensation for all overtime hours which are worked and all other pay-related benefits, or it may include only certain benefits in a partial consolidation;
(d) hours of work means the time during which seafarers are required to do work on account of the ship;
(e) overtime means time worked in excess of the normal hours of work.

1. For seafarers whose remuneration includes separate compensation for overtime worked:
(a) for the purpose of calculating wages, the normal hours of work at sea and in port should not exceed eight hours per day;
(b) for the purpose of calculating overtime, the number of normal hours per week covered by the basic pay or wages should be prescribed by national laws or regulations, if not determined by collective agreements, but should not exceed 48 hours per week; collective agreements may provide for a different but not less favourable treatment;
(c) the rate or rates of compensation for overtime, which should be not less than one and one-quarter times the basic pay or wages per hour, should be prescribed by national laws or regulations or by collective agreements, if applicable; and
(d) records of all overtime worked should be maintained by the master, or a person assigned by the master, and endorsed by the seafarer at no greater than monthly intervals.

3. National laws or regulations or collective agreements may provide for compensation for overtime or for work performed on the weekly day of rest and on public holidays by at least equivalent time off duty and off the ship or additional leave in lieu of remuneration or any other compensation so provided.

4. National laws and regulations adopted after consulting the representative shipowners’ and seafarers’ organisations or, as appropriate, collective agreements should take into account the following principles:
(a) equal remuneration for work of equal value should apply to all seafarers employed on the same ship without discrimination based on race, colour, sex, religion, political opinion, national extraction or social origin;
(b) the seafarers’ employment agreement specifying the applicable wages or wage rates should be carried on board the ship; information on a number of wages or wage rates should be made available to each seafarer, either by providing at least one signed copy of the relevant information to the seafarer in a language which the seafarer understands, or by posting a copy of the agreement in a place accessible to seafarers or by some other appropriate means;
(c) wages should be paid in legal tender; where appropriate, they may be paid by bank transfer, bank cheque, postal cheque or money order;
(d) on termination of engagement all remuneration due should be paid without undue delay;
(e) adequate penalties or other appropriate remedies should be imposed by the competent authority where shipowners unduly delay or fail to make, payment of all remuneration due;
(f) wages should be paid directly to seafarers’ designated bank accounts unless they request otherwise in writing;
(g) the shipowner should impose no limit on seafarers’ freedom to dispose of their remuneration;
(h) deduction from remuneration should be permitted only if:

(i) there is an express provision in national laws or regulations or in an applicable collective agreement and the seafarer has been informed, in the manner deemed most appropriate by the competent authority, of the conditions for such deductions; and
(ii) the deductions do not in total exceed the limit that may have been established by national laws or regulations or collective agreements or court decisions for making such deductions;
(i) no deductions should be made from a seafarer’s remuneration in respect of obtaining or retaining employment;

(j) monetary fines against seafarers other than those authorised by national laws or regulations, collective agreements or other measures should be prohibited;
(k) the competent authority should have the power to inspect stores and services provided on board ship to ensure that fair and reasonable prices are applied for the benefit of the seafarers concerned; and
(l) to the extent that seafarers’ claims for wages and other sums due in respect of their employment are not secured in accordance with the provisions of the International Convention on Maritime Liens and Mortgages, 1993, such claims should be protected in accordance with the Protection of Workers’ Claims (Employer’s Insolvency) Convention, 1992 (No. 173).

2. The competent authority should ensure:
(a) by means of a system of supervision and sanctions, that wages are paid at not less
thea the rate or rates fixed; and
(b) that any seafarers who have been paid at a rate lower than the minimum wage are enabled to recover, by an inexpensive and expeditious judicial or other procedure, the amount by which they have been underpaid.