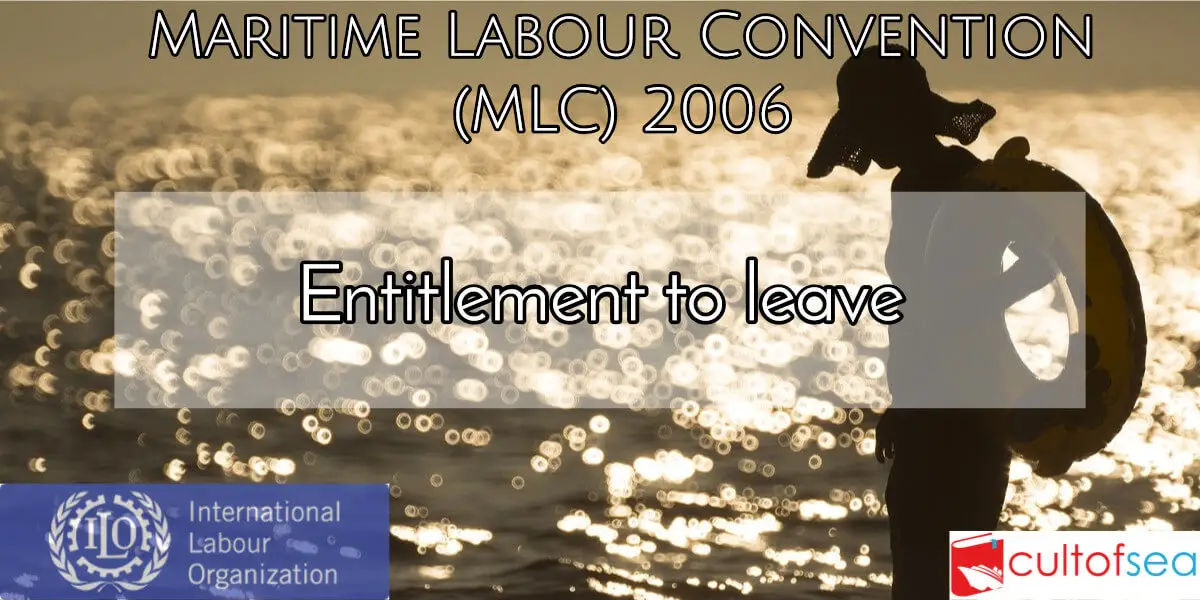 Purpose: To ensure that seafarers have adequate leave

1. Each Member shall require that seafarers employed on ships that fly its flag are given paid annual leave under appropriate conditions.
2. Seafarers shall be granted shore leave to benefit their health and well-being and with the operational requirements of their positions.

1. Each Member shall adopt laws and regulations determining the minimum standards for annual leave for seafarers serving on ships that fly its flag, taking proper account of the special needs of seafarers with respect to such leave.
2. Subject to any collective agreement or laws or regulations providing for an appropriate method of calculation that takes account of the special needs of seafarers in this respect, the annual leave with pay entitlement shall be calculated on the basis of
a minimum of 2.5 calendar days per month of employment. The manner in which the length of service is calculated shall be determined by the competent authority or through the appropriate machinery in each country. Justified absences from work shall not be considered as annual leave.
3. Any agreement to forgo the minimum annual leave with pay prescribed in this Standard of MLC 2006, except in cases provided for by the competent authority, shall be prohibited.

1. The time at which annual leave is to be taken should, unless it is fixed by regulation, collective agreement, arbitration award or other means consistent with national practice, be determined by the shipowner after consultation and, as far as possible, in agreement with the seafarers concerned or their representatives.
2. Seafarers should in principle have the right to take annual leave in the place with which they have a substantial connection, which would normally be the same as the place to which they are entitled to be repatriated. Seafarers should not be required without their consent to take annual leave due to them in another place except under the provisions of a seafarers’ employment agreement or of national laws or regulations.
3. If seafarers are required to take their annual leave from a place other than that permitted by paragraph 2 of this Guideline, they should be entitled to free transportation to the place where they were engaged or recruited, whichever is nearer their home; subsistence and other costs directly involved should be for the account of the shipowner; the travel time involved should not be deducted from the annual leave with
pay due to the seafarer.
4. A seafarer taking annual leave should be recalled only in cases of extreme emergency and with the seafarer’s consent.

1. The division of the annual leave with pay into parts, or the accumulation of such annual leave due in respect of one year together with a subsequent period of leave, may be authorized by the competent authority or through the appropriate machinery in
each country.
2. Unless otherwise provided in an agreement applicable to the shipowner and the seafarer concerned, the annual leave with pay recommended in this Guideline of MLC2006 should consist of an uninterrupted period.

Special measures should be considered with respect to young seafarers under the age of 18 who have served six months or any other shorter period of time under a collective agreement or seafarers’ employment agreement without leave on a foreign-going ship which has not returned to their country of residence in that time, and will not return in the subsequent three months of the voyage. Such measures could consist of their repatriation at no expense to themselves to the place of original engagement in their country of residence for the purpose of taking any leave earned during the voyage.