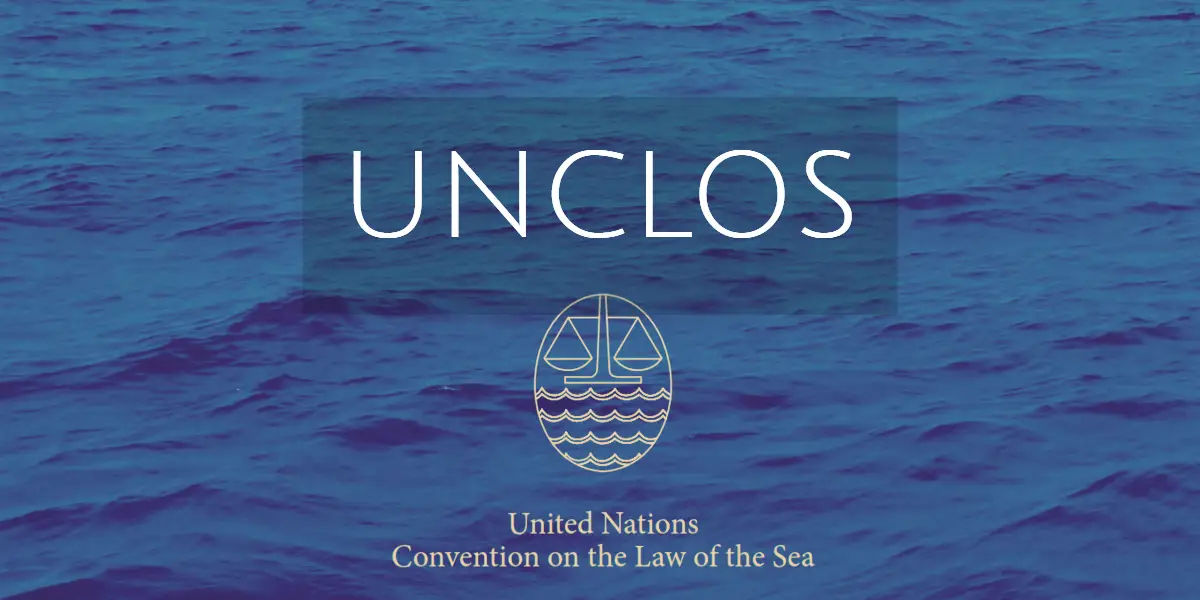 United Nations Convention on the Law of the Sea (UNCLOS)

As otherwise provided in the UNCLOS convention, the normal baseline for measuring the breadth of the territorial sea is the low-water line along the coast as marked on large-scale charts officially recognized by the coastal State. 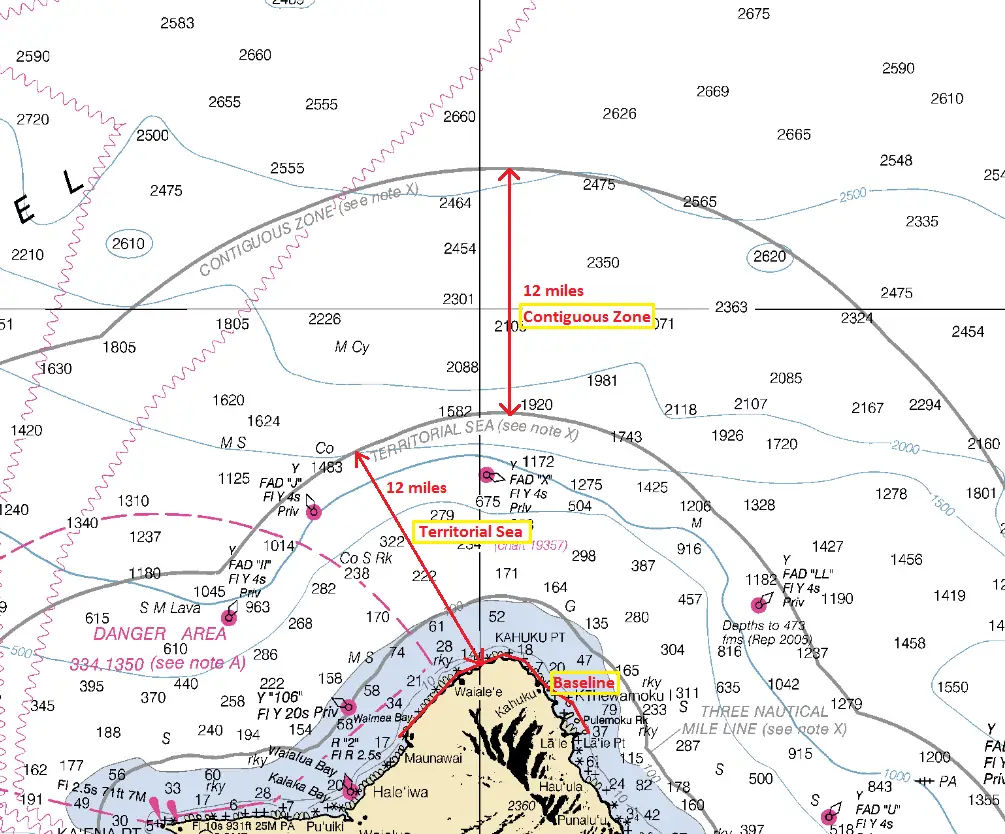 Objectives of the UNCLOS

Every state has the right to establish the breadth of its territorial sea up to a limit not exceeding 12 nautical miles measured from the baseline determined in accordance with this convention.

Contiguous zone generally extends 12 nautical miles beyond the territorial sea limit. It consists of a combination of Revenue and Public health or Quarantine jurisdiction.

The exclusive economic zone shall not extend beyond 200 nautical miles from the baselines from which the breadth of the territorial sea is measured.

In an Exclusive Economic Zone, the coastal state has the following rights:

The obligation of vessels in an exclusive economic zone:

The Continental shelf of a coastal state comprises of the seabed and subsoil of the submarine areas that extend beyond its territorial sea throughout the natural prolongation of its land territory to the outer edge of the continental margin or to a distance 200nm from the baseline. Almost everywhere the shelves represent simply a continuation of the continental landmass beneath the ocean margins.

A coastal state shall establish the outer edge of the continental margin wherever it extends 200 Nautical Miles by procedures mentioned in this article.
The outer limit of the continental shelf shall not exceed 350 nautical miles from the baseline, from which the breadth of the territory is measured.

Under high Seas for both coastal and landlocked States:

The high seas shall be reserved for peaceful purposes. 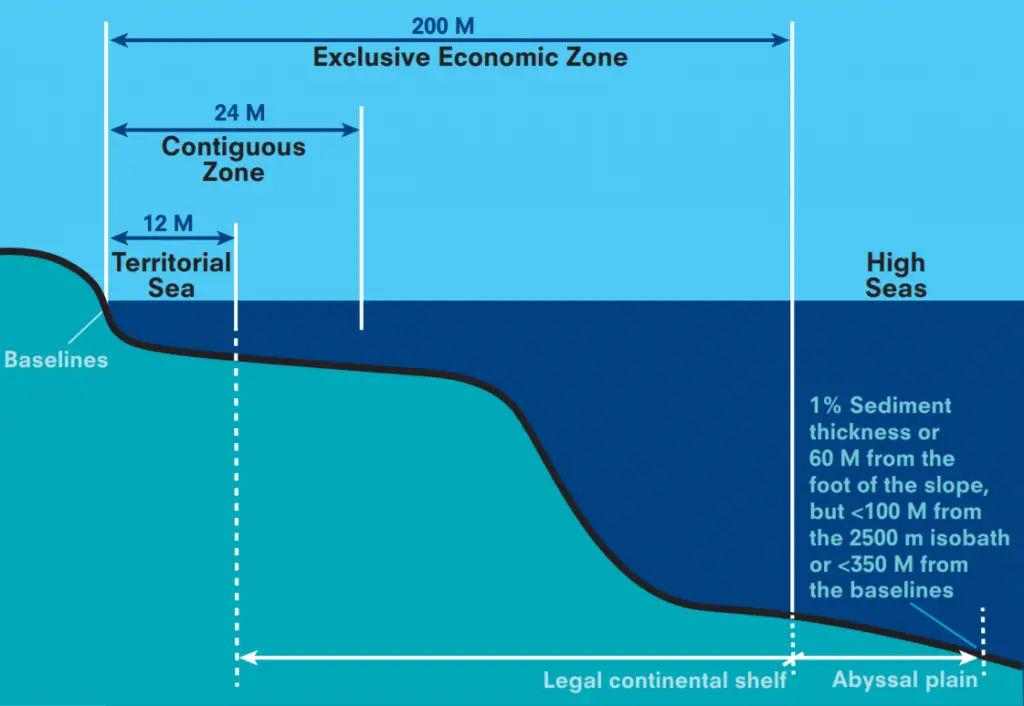 Ships of all states whether coastal or landlocked enjoy the right of innocent passage through the territorial waters.

Passage means navigation through the territorial sea for the purpose of:

Passage shall be continuous and expeditious. However, passage includes stopping and anchoring, but only in so far as the same are incidental to ordinary navigation or are rendered necessary by force majeure or distress or for the purpose of rendering assistance to persons, ships or aircraft in danger or distress.

Salient features of the Innocent Passage

1. A passage is innocent so long as it is not prejudicial to the peace, good order or security of the coastal State. Such passage shall take place in conformity with this Convention and with other rules of international law.

2. Passage of a foreign ship shall be considered to be prejudicial to the peace, good order or security of the coastal State if in the territorial sea it engages in any of the following activities:

(a) any threat or use of force against the sovereignty, territorial integrity or political independence of the coastal State, or in any other manner in violation of the principles of international law embodied in the Charter of the United Nations;

(b) any exercise or practice with weapons of any kind;

(c) any act aimed at collecting information to the prejudice of the defence or security of the coastal State;

(d) any act of propaganda aimed at affecting the defence or security of the coastal State;

(e) the launching, landing or taking on board of any aircraft;

(f) the launching, landing or taking on board of any military device;

(g) the loading or unloading of any commodity, currency or person contrary to the customs, fiscal, immigration or sanitary laws and regulations of the coastal State;

(h) any act of willful and serious pollution contrary to this Convention;

(i) any fishing activities;

(j) the carrying out of research or survey activities;

(k) any act aimed at interfering with any systems of communication or any other facilities or installations of the coastal State;

(l) any other activity not having a direct bearing on passage.

1. In straits, all ships and aircraft enjoy the right of transit passage, which shall not be impeded; except that, if the strait is formed by an island of a State bordering the strait and its mainland, transit passage shall not apply if there exists seaward of the island a route through the high seas or through an exclusive economic zone of similar convenience with respect to navigational and hydrographical characteristics.

3. Any activity which is not an exercise of the right of transit passage through a strait remains subject to the other applicable provisions of UNCLOS.

Duties of Ships and Aircraft during Transit

1. Ships and aircraft, while exercising the right of transit passage, shall:

2. Ships in transit passage shall:

3. Aircraft in transit passage shall:

An unimpeded transit passage is freedom of navigation or passage solely for the purpose of transiting a strait connecting one area of a High Seas to another are of High Seas (or EEZ to EEZ).

This does not preclude passage through the strait for the purpose of entering a port or coastal state bordering the strait subject to conditions of entry of that state.

An “archipelagic State” means a State constituted wholly by one or more archipelagos and may include other islands. It is a designation used for island countries, in which “archipelago” means a group of islands, including parts of islands, interconnecting waters and other natural features which are so closely interrelated that such islands, waters and other natural features form an intrinsic geographical, economic and political entity, or which historically have been regarded as such.

Duties of Flag State under UNCLOS

When a State assumes legal authority over a ship by grant of its flag, the State also assumes a certain obligation to take measures to ensure that the vessel, viewed both as an instrument of navigation and a collective of ship-users, acts in a fashion consistent with international law.

Rights and Duties of a Coastal State

In a zone contiguous to its territorial sea, described as the contiguous zone, the coastal State may exercise the control necessary to:

In the exclusive economic zone, the coastal State has:

In the Continental Shelf, the coastal State can:

1. Exercises over the continental shelf sovereign rights for the purpose of exploring it and exploiting its natural resources.

3. The rights of the coastal State over the continental shelf do not depend on occupation, effective or notional, or on any express proclamation.

4. All states are entitled to lay Submarine Cables and pipelines on the continental shelf. Coastal states may not impede the laying or maintenance of such cables or pipelines.

Piracy as per UNCLOS

On the high seas, or in any other place outside the jurisdiction of any State, every State may seize a pirate ship or aircraft, or a ship or aircraft taken by piracy and under the control of pirates, and arrest the persons and seize the property on board. The courts of the State which carried out the seizure may decide upon the penalties to be imposed, and may also determine the action to be taken with regard to the ships, aircraft or property, subject to the rights of third parties acting in good faith.

All States shall cooperate to the fullest possible extent for repression of piracy on the high seas or in another place outside the jurisdiction of any state.

A seizure on account of piracy may be carried out only by warships or military aircraft, or other ships or aircraft clearly marked and identifiable as being on government service and authorized to that effect.

All States shall cooperate in the suppression of illicit traffic in narcotic drugs and psychotropic substances engaged in by ships on the high seas contrary to international conventions.

All States shall cooperate in the suppression of unauthorized broadcasting from the high seas.