You are here: Home / Maritime Law / Merchant Shipping Act / Unseaworthy and Unsafe Ship’s as per MSA 1958 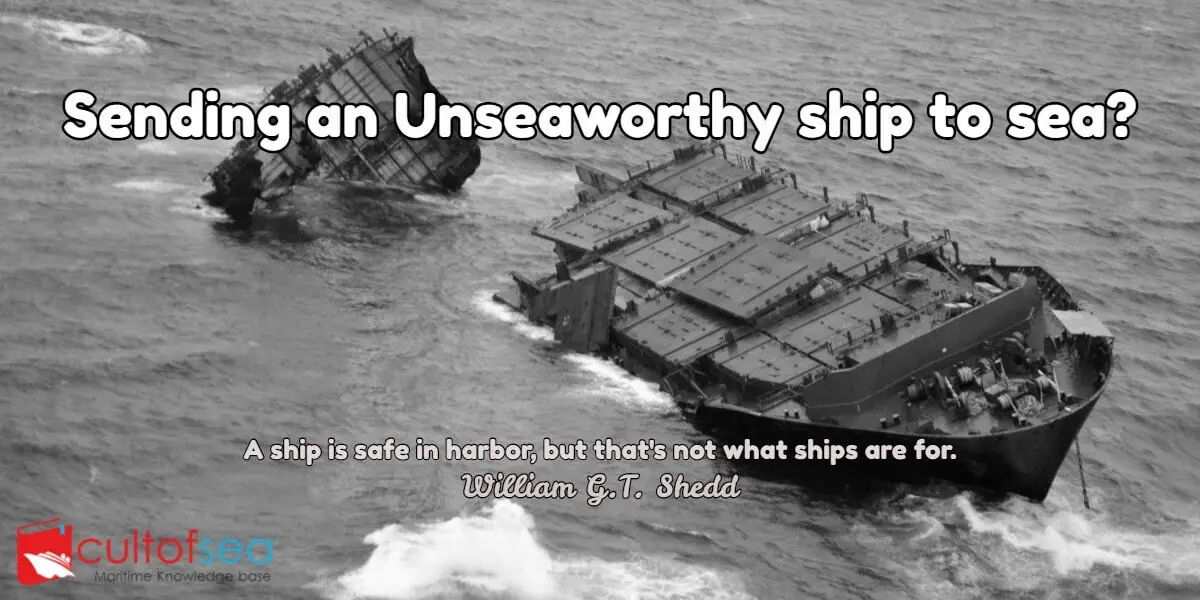 1. Sending an unseaworthy ship to sea and

2. Obligation of owner and master to crew with respect to seaworthiness

What is a Unseaworthy and an Unsafe Ship?

The MSA 1958 defines an UNSEAWORTHY ship when the materials of which she is made, her construction, the qualification of the master, the number, description and qualification of crew including officers, the weight, description and stowage of the cargo and ballast, the condition of her hull & equipment, boilers & machinery are not such render her in every respect fit for the proposed voyage or service.

UNSAFE Ship means, because of the defective condition of her hull, equipment or machinery, or by reason of overloading or improper loading, is unfit to proceed to sea without serious danger to human life.

The central government may detain any unsafe ship for the purpose of being surveyed or finally detained. A written statement of the grounds of detention shall be immediately served to the master of the ship. The ship shall be surveyed & on receiving the report of the survey, the ship may be released or detained either absolutely or until the required repairs or alteration or unloading of cargo as in necessary for the protection of human life. Before an order of final detention is made, the master of the ship must be served with a copy of the report and he may appeal against the report within 7 days.

The Provisions of Merchant Shipping Act 1958 as regards to:

1. Sending an Unseaworthy ship to sea

2. Obligation of Owner and Master to crew with respect to seaworthiness

In every agreement with the crew & in every contract with an apprentice it is implied that the owner, master, every agent in charge of loading or preparing the ship for sea shall ensure that she is in a seaworthy state at the commencement of the voyage & during the voyage. Upon request of the owner or otherwise, the central government may appoint a surveyor to survey the hull, equipment & machinery of any sea-going ship.

Certificate of seaworthiness if a ship sustains any damage to her hull or machinery or grounds & refloats the master must cause the ship to be surveyed at the next port of arrival. An entry should be made in the official log book & a protest noted at the first opportunity. It is advisable to use a classification society surveyor & if he(surveyor of another class) is satisfied that the ship is fit in every respect to continuing her voyage, he will issue a certificate of seaworthiness.

This certificate is issued by the class surveyor after the survey & findings or recommendations recorded on Certificate. The surveyor may require that the damaged ship be dry-docked for further examination at a named subsequent port. It is very important to obtain the appropriate certificate as if anything goes wrong at a later stages of the voyage & is traced back to the incident which required a survey not only is the vessel insurance jeopardized but also the owner will loose his rights to claim the benefit of any exception clause in the contract of affreightment.