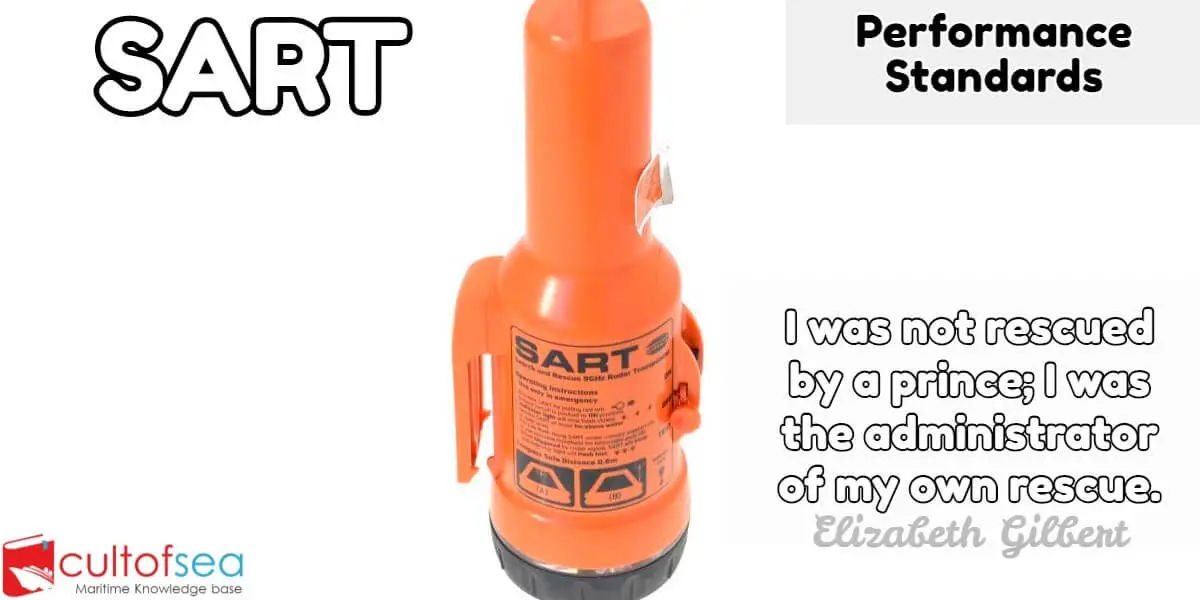 The SART should be capable of indicating the location of a unit in distress on the assisting unit’s radars by means of a series of equally spaced dots (resolution A.530(13)).

1. The SART should:
.1 be capable of being easily activated by unskilled personnel;
.2 be fitted with means to prevent inadvertent activation;
.3be equipped with a means which is either visual or audible or both visual and audible, to indicate correct operation and to alert survivors to the fact that a radar has triggered the SART;
.4 be capable of manual activation and deactivation; provision for automatic activation may be included
.5 be provided with an indication of the standby condition;
.6 be capable of withstanding without damage drops from a height of 20m into water;
.7 be watertight at a depth of 10m for at least 5min;
.8 maintain water tightness when subjected to a thermal shock of 45°C under specified conditions of immersion;
.9 be capable of floating if it is not an integral part of the survival craft;
.10 be equipped with buoyant lanyard, suitable for use as a tether, if it is capable of floating;
.11 not be unduly affected by seawater or oil;
.12 be resistant to deterioration in prolonged exposure to sunlight;
.13 be of a highly visible yellow/orange colour on all surfaces where this will assist detection;
.14 have a smooth external construction to avoid damaging the survival craft; and
.15be provided with a pole or other arrangement compatible with the antenna pocket in a survival craft

2. The SART should have sufficient battery capacity to operate in the standby condition for 96h and, in addition, following the stand-by period, to provide transponder transmissions for 8h when being continuously interrogated with a pulse repetition frequency of 1kHz.

3. The height of the installed SART antenna should be at least 1m above sea-level.

6. Labelling
The following should be clearly indicated on the exterior of the equipment:
.1 brief operating instructions; and
.2 expiry date for the primary battery used.