You are here: Home / General / TRS or a Tropical Revolving Storm 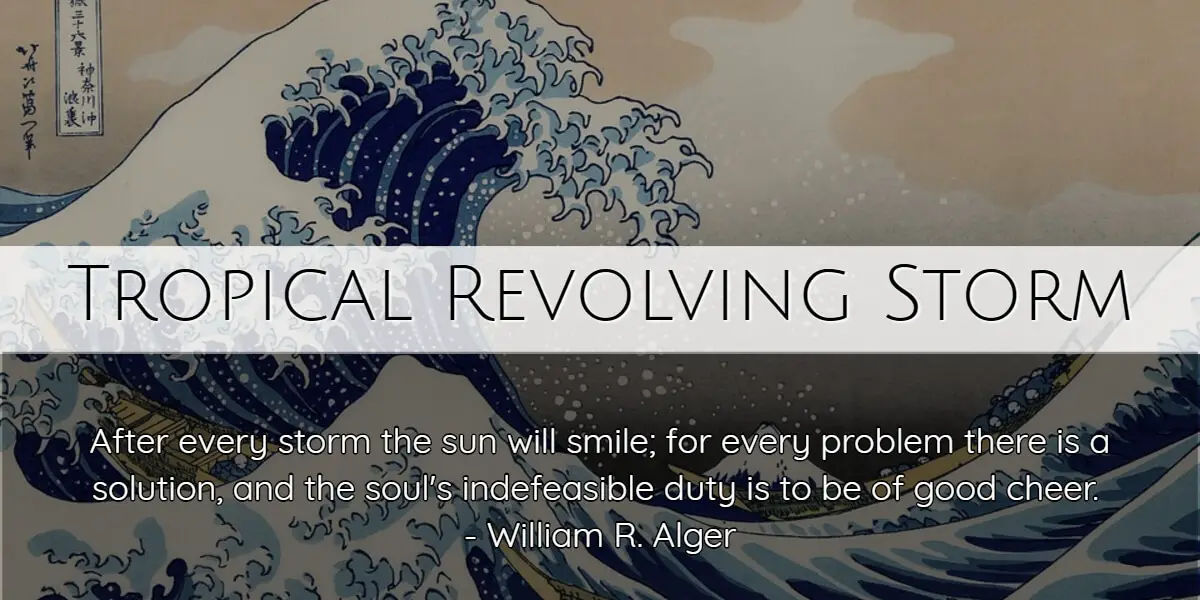 TRS is common in various places in the world, but they can be called as below:

TRS originate in latitudes between 5° & 20° and travel between W and WNW in the NH and between W and WSW in the SH, at a speed of about 12 knots. Somewhere along their track, they curve away from the equator – curve to N and then recurve to NE in the NH; curve to S and then recurve to SE in the SH.
Track – The route over which a TRS is already passed.
Path – The predicted route, over which, there is a possibility of the TRS passing at near future.
Another point on the route is called the Vertex, which is the westernmost point, of the TRS, when recurving takes place. 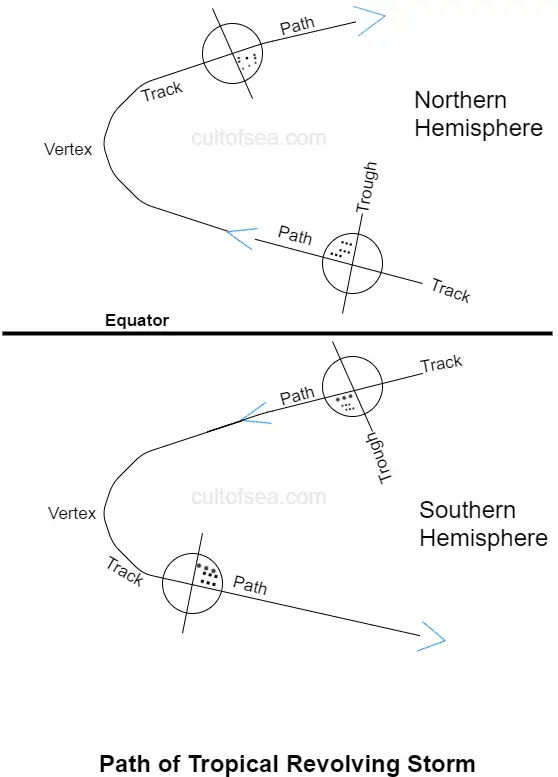 The recurving is such that the storm travels around the oceanic high (which is situated at about 30°N and 30°S in the middle of large oceans). After recurving, the speed of travel increases to about 15 to 20 knots. Sometimes, a TRS does not curve or recurve at all, but continues on its original path, crosses the coast and dissipates quickly thereafter due to friction and lack of moisture. It is important to note that all TRSs do not follow such definite paths and speeds. In their initial stages, occasional storms have remained practically stationary or made small loops for as long as four days.
Semi circles: If a storm is divided along the route, at which the storm is passing, then we get 2 parts, which are,

In the northern hemisphere (NH), conditions on the right-hand side of storms are more severe than those on their left-hand sides. For that reason, in NH, RHSC is called the “dangerous semicircle” and LHSC is called the “navigable semicircle”.
So again, as per navigator’s judgment, semicircles are two types, which are,
Related Article:   Notice of Readiness (NOR) - Definition, Contents & Requirements 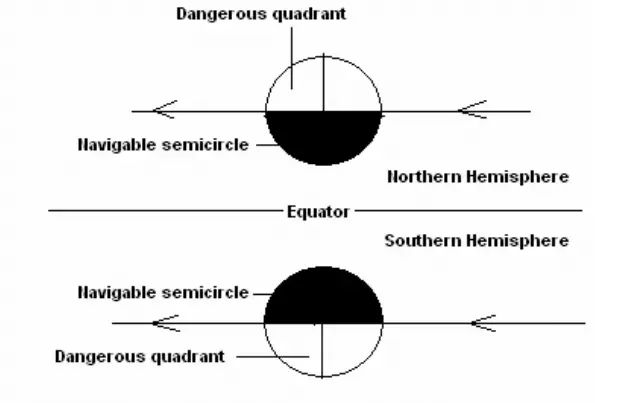 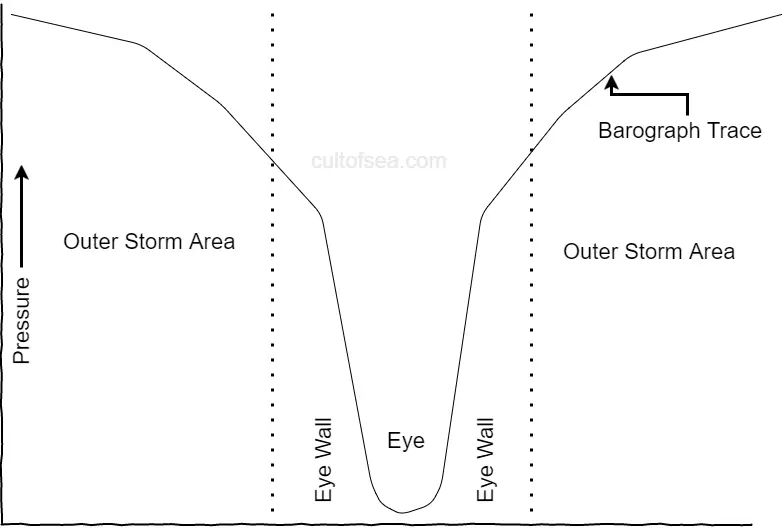 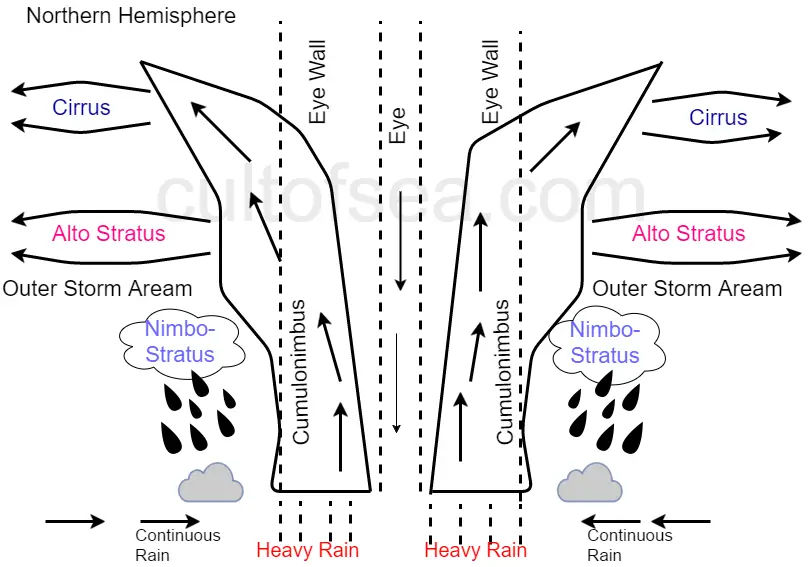 Life cycle of a tropical cyclone

The complete life cycle of a tropical cyclone usually spans about 9 days but can be only 2 or 3 days or more than 20 days.

The formation of a tropical cyclone is dependent upon six favourable environmental conditions (described before), which are available in the Inter Tropical Convergence Zone. Tropical cyclones gain energy from latent heat, driven by significant thunderstorm activity and condensation of moist air. In other words, tropical cyclone formation can be called as a gigantic vertical heat engine, which is also powered by earth’s gravity and rotation. On satellite images, this stage appears as an unusually active, but poorly organised area of convection (thunderstorms). Sometimes curved cumulus clouds band towards an active area of thunderstorms, which indicates the location of the centre. At this stage, if tropical cyclones move inland, then they make little or no damage but may form heavy rain and flooding in some areas.

In this stage, the area of convection continues and becomes more organised. Also strengthening occurs simultaneously. The minimum surface pressure rapidly drops well below than normal level. Gale-force winds also develop with the strengthening pressure gradient. The circulation centre is well defined and subsequently, an eye may begin to form. Satellite and radar observations of the system show as the distinctive spiral banding pattern. Premature Stage of a tropical cyclone can cause devastating wind and storm surge effects upon coastline, but damage occurs usually within a small area.

If the ocean and atmosphere environment continue to be favourable, the cyclone may continue to intensify to this stage. This is the severe cyclone stage, where the cyclone is most dangerous. Approximately half of the cyclones can come up to this stage. During this stage, the cyclonic circulation and extent of the gales increase markedly. In satellite images, the cloud fields look highly organised and become more symmetrical, with a well-centered, distinct round eye. This stage remains for a day or so with maximum intensity unless the cyclone remains in a highly favourable environment.

At this stage, the warm core of TRS is destroyed, as the central pressure increases and the maximum surface winds weaken. Decay may occur very rapidly if the system moves into an unfavourable atmospheric or geographic environment. At this stage, the heavy or medium rain can be available.

The signs and symptoms Of TRS/cyclone are as follows:

Action when approach of a TRS is confirmed

1 Obtain the bearing of Storm Centre

2 Ascertain in which semi-circle the vessel lies

Actions in TRS, at port

If possible, first try to go to sea at a safe distance with plenty sea room and sufficient depth of water. Else do the following:

Actions in TRS, at anchorage

If possible, first try to go to sea at safe distance with plenty sea room and sufficient depth of water or shift to a safe anchorage with enough shelter. Otherwise, do the following:

Actions in TRS, At sea

If the vessel is in the dangerous quadrant:

Proceed as fast as practicable with the wind 1 to 4 points on the stbd bow (port bow in SH) – 1 point for slow vessels (less than 12 knots) and 4 points for fast vessels (more than 12 knots) altering course as the wind veers (backs in SH).
This action should be kept up until the pressure rises back to normal i.e. until the vessel is outside the outer storm area. If there is insufficient sea room, the vessel should heave to with the wind on the stbd bow (port bow in SH) until the storm passes over.

If the vessel is in the path of the storm or if in the navigable semi-circle:

Proceed as fast as practicable with the wind about 4 points on the stbd quarter (port quarter in SH), altering course as the wind backs (veers in SH). This action should be kept up until the pressure rises back to normal i.e. until the vessel is outside the outer storm area. 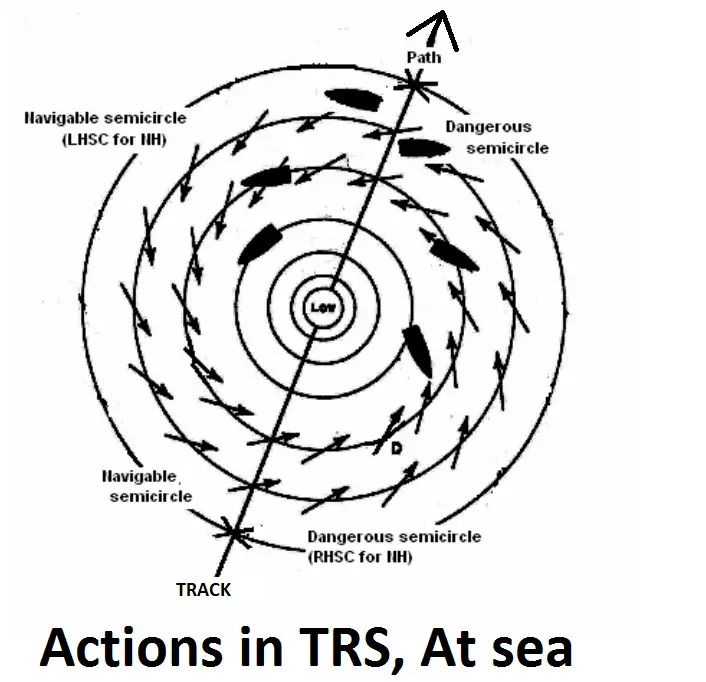 The ideal conditions for the formation of a TRS exist during day time over large Tropical islands, in mid-ocean, between latitudes 5° & 20°