You are here: Home / General / Types of Combination Carriers

If coils are required for heating the oil these are installed in the wings or the holds and welded on racks to the plating near the bottom or the tank top. The centre compartments contain no piping, and are loaded and pumped out by utilising wells let into the double bottoms and connected to the cargo piping system through the wing tanks.

The wing tanks are arranged in the same manner as a conventional tanker and carry oil and ballast as required. Coils and cargo piping are similar to those found in conventional tankers. These ships are designed to carry their full deadweight when trading as tankers and also when carrying heavy ore concentrates. They are not usually designed to cany light bulk cargoes. Heavy ore concentrates are carried only in the centre holds. Oil cargo may be carried in both centre holds and cargo wing tanks.

Holds are constructed so as to extend approximately one half of the total breadth of the ship. Conventional wing tanks incorporate the main strengthening sections, allowing smooth sides in the centre holds. Holds are always constructed with double bottom spaces beneath them. Hatches are generally single piece side rolling with a sealing arrangement similar to that on OBO ships. 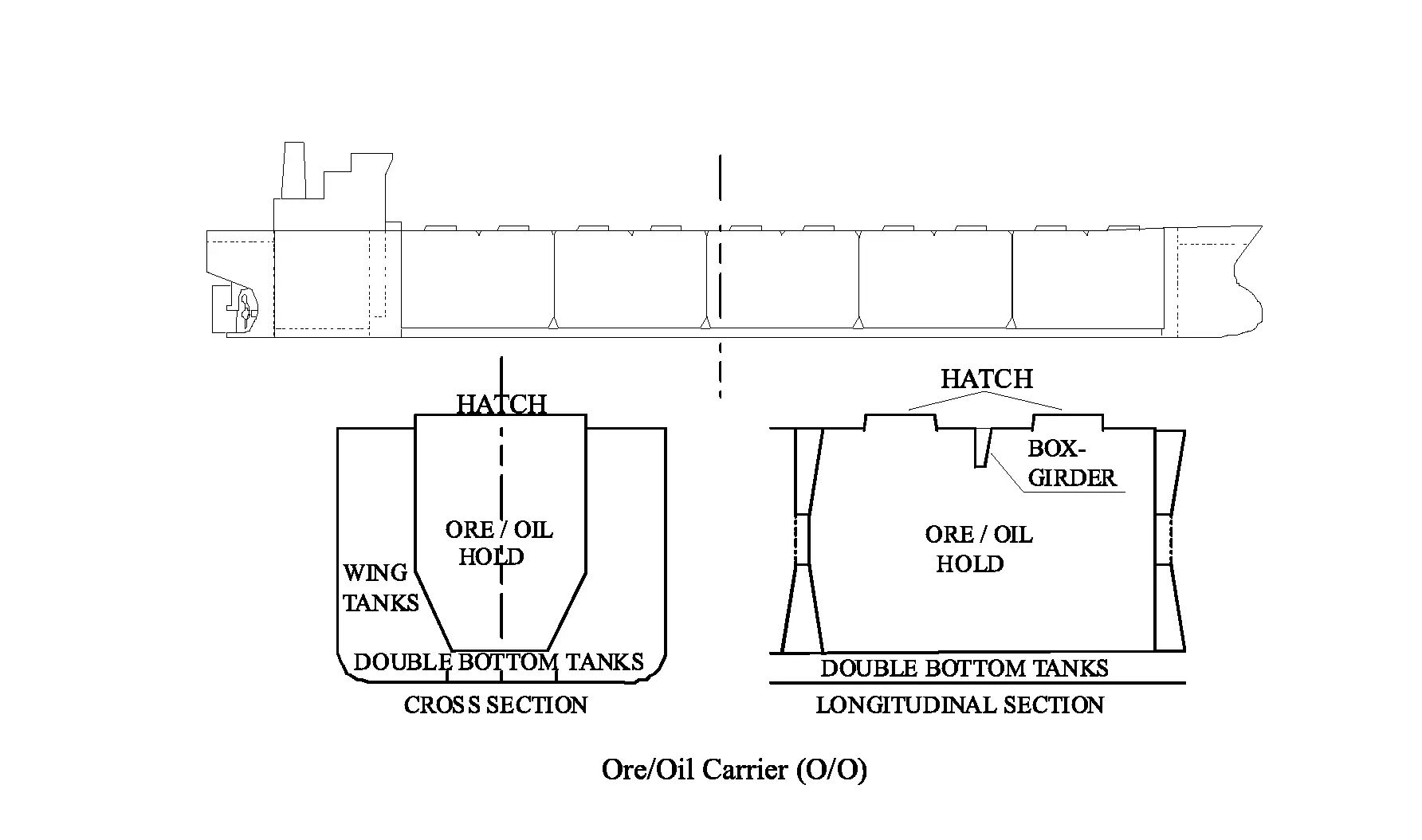 The OBO ship is capable of carrying its full deadweight when trading as an ore carrier with cargoes of heavy ore concentrates. This type of ship is also designed to carry other types of dry bulk cargo such as grain and coal.

Holds are usually arranged to extend the full breadth of the ship, with upper and lower hopper tanks and double bottom tanks. In some cases holds may have wing tanks. Oil or dry bulk cargo is carried in the holds. Oil may, in addition, be carried in one or more sets of upper hopper tanks, and where there are wing tanks they may also be used. Normally wing tanks for the carriage of oily slops are fitted aft of the cargo holds. Segregated (clean) ballast may be carried in top and bottom hopper tanks and in double bottom tanks.

Conventional bulk carrier hatches, normally of the side rolling type, are fitted with a special sealing arrangement.

Cargo and ballast pipelines are typically installed in a duct keel or in two pipe tunnels located either side of the centre fine and separated by a double bottom tank. The ballast system is entirely independent of the cargo system. Ballast can be loaded in the holds if this is necessary but has to be done by utilising the cargo system. In some vessels each hold or centre compartment has a separate loading line which enters the ducts via the void spaces, thus allowing the pump room to be kept gas-free.

This type of vessel at first appears to be much the same, as an Oil-Ore Carrier, as the centre compartments are constructed along similar lines. The main difference is that the bulk oil carrier does not carry either oil or ore in its wing tanks, which are purely for ballast.

Looked at from a structural standpoint, the holds of the Bulk-Oil carrier are bigger and wider, and the wing tanks are much narrower. Both ships have double bottoms, which can be used for ballast, and the cargo piping system is generally arranged so that cargo is loaded through pipes or ducts which run fore and aft through the double bottoms. 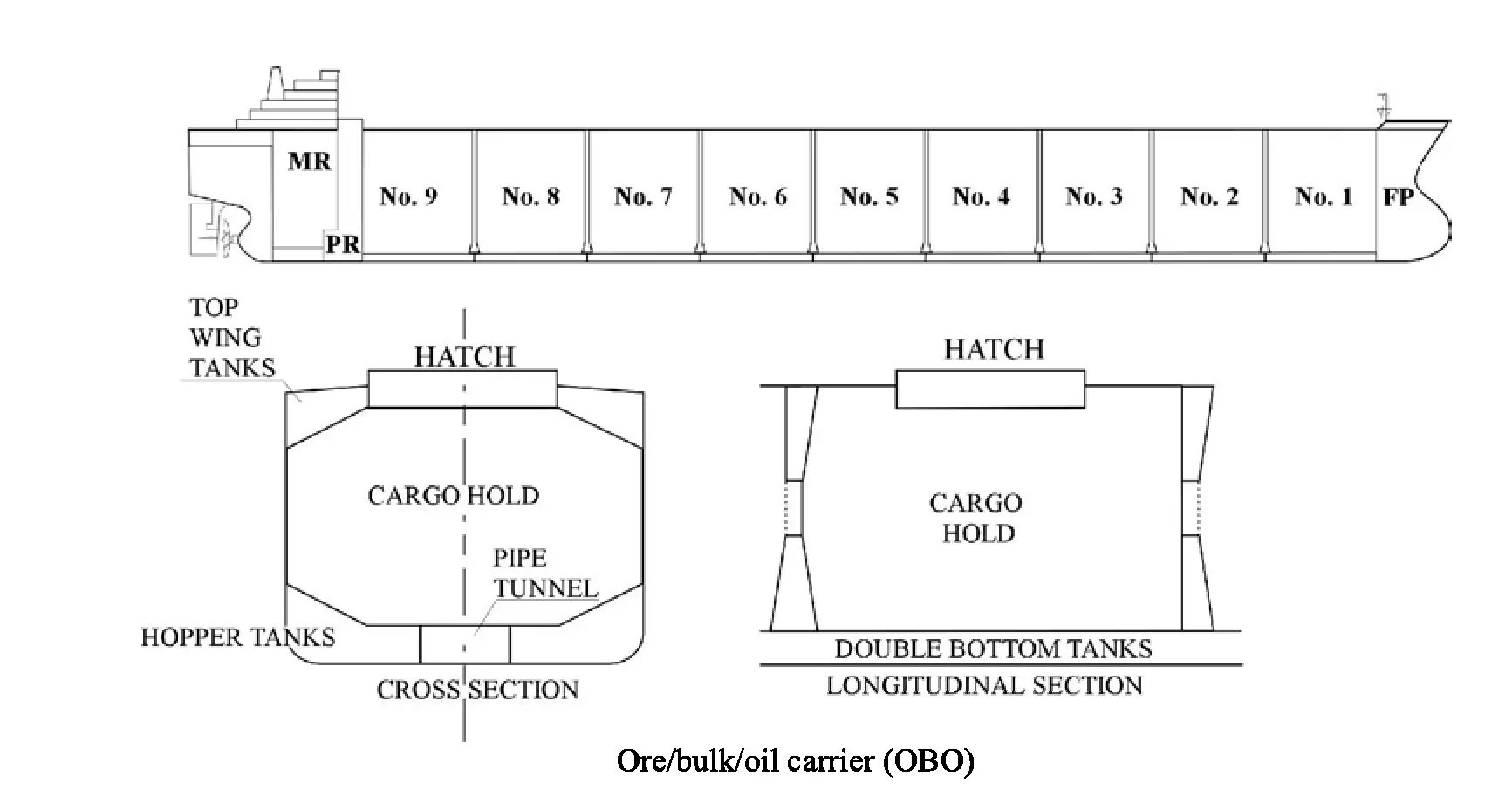 Petroleum and dry bulk cargoes must not be carried simultaneously. Attention should be paid to the gas contents of wing tanks when the vessel is discharging bulk ore. Similarly, it should be realised that damaged bulkheads may lead to flammable gas mixtures in ore holds.

Comparison of both Types of Combined Carrier

Size for size, the “O/O” and “OBO” carriers are reported to cost about 15 percent, to 20 percent, more than a conventional tanker. Ore is a much heavier cargo than oil. It requires less stowage space and concentrates the weight directly below each hold. It follows, therefore, that much of the extra cost goes into making the vessel stronger, and in providing the flexibility to handle ore as well as oil.

Some Bulk-Oil carriers have difficulty loading to their marks when handling light crude, this is particularly true on short voyages when bunkers, water and stores are kept to a minimum. Tank cleaning is reduced and there should be no delays in port for ballasting and deballasting, as with a segregated ballast system this can be done simultaneously. Both types vary considerably with regard to the type and arrangement of cargo-pumping systems.

In some instances the cargo manifolds are cramped for space by the cargo hatches, and it becomes difficult to connect an adequate number of loading arms or hoses.

Loading rates are more likely, to be restricted in Bulk-Oil carriers than Oil-Ore carriers, as the centre compartments are very large. Most are restricted to loading 50 percent, or less of their cargo compartments at any one time because of stress and stability problems. If such a vessel takes a list, it is very difficult to correct without stopping the loading operation.

When discharging, the Bulk-Oil carrier should have little or no stripping to do, and apart from getting the oil out of the ducts there should be no delays in discharging crude. In some of the vessels fitted with ducts, great care has to be taken when oil first enters a duct, or when switching tanks during a loading operation. Air trapped in the duct can be compressed by, the incoming liquid, and finally vent itself taking some crude with it up the vent pipe with messy, if not disastrous consequences.

The Economics of the Combined Carrier

Ideally, the combined carrier, whether it is Oil-Ore or Bulk-Oil should carry coal or ore way, and oil the other, thus eliminating the ballast passage. A minority of such vessels are fortunate to be fixed in such trades. More frequently a vessel engaged in carrying solid as well as liquid cargo, will make a triangular or box voyage with a short ballast voyage between longer loaded passages. For the main part, many of the larger ships may carry oil all their useful lives, in much the same way as a conventional tanker, but the ability to switch is a useful hedge against low freight rates.