You are here: Home / Colreg's / Part B- Steering and Sailing / Rule 9 – Narrow Channels 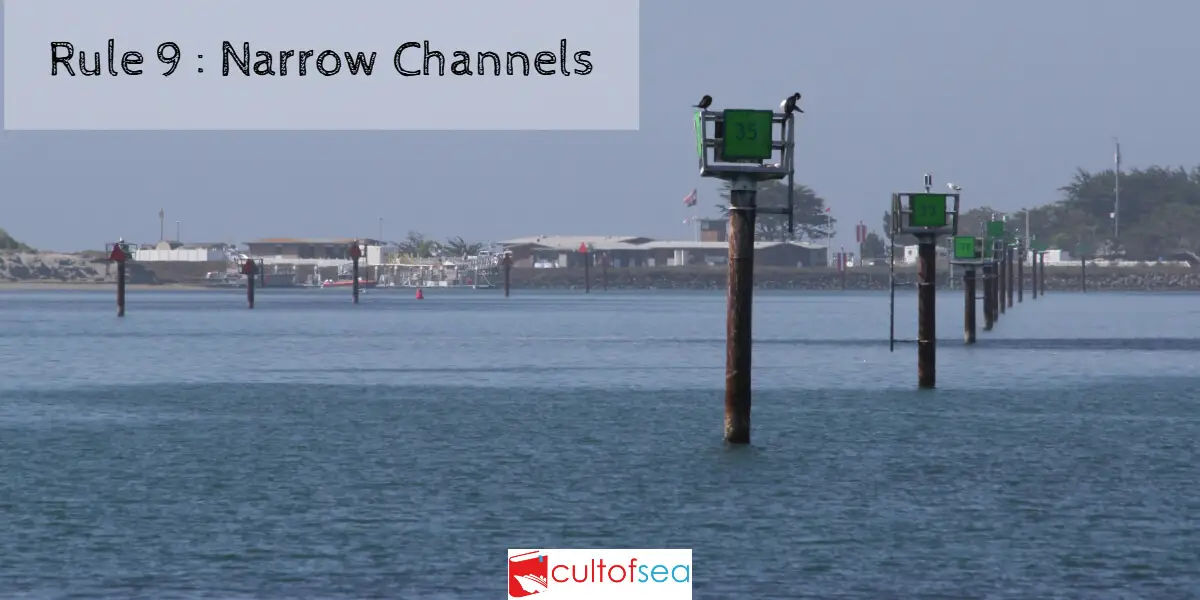 Two terms are used throughout the Rule that are not defined. They are “narrow channel” (namesake of the Rule) and “(narrow) fairway.” We must assume that the drafters of the Rules either believed their meanings to be obvious or else were not able to formulate suitable concise definitions.

Rule 9 applies only on waters described by the two terms. What is “narrow” depends on the type of vessel and the circumstances. A “channel” is a natural or dredged lane restricted on either side by shallow water; it is often marked by buoys. A “fairway” is generally in open water, and the water on either side is not much shallower than within the fairway. Fairways are used to route vessels away from natural hazards, oil platforms, mines, or smaller vessels. Fairways should be differentiated from the lanes in traffic separation schemes; vessels in the latter should follow Rule 10 rather than Rule 9.

No ambiguity in this part of the Rule, it is a general advice. As safe and practicable leaves it to the watch keeping officer to take the ultimate decision to deviate from this Rule. If due to the draft or width of the ship as well as the contour of the bottom of the channel it is not safe or is not practicable to comply with this Rule then the watch keeper has his common sense to guide him, keeping always safety in mind.

b. A vessel of less than 20meters in length or a sailing vessel shall not impede the passage of a vessel which can safely navigate only within a narrow channel or fairway.

This again is a guideline for small vessels as well as for sailing crafts to keep away from ships that can safely navigate only within the narrow channel or fairway, since the small vessels and the sailing craft can always use the shallower part of the channel they should not impede the passage of a large ship.

c. A vessel engaged in fishing shall not impede the passage of any other vessel navigating within a narrow channel or fairway.

d. A vessel shall not cross a narrow channel or fairway if such crossing impedes the passage of a vessel which can safely navigate only within such channel or fairway. – The latter vessel may use the sound signals prescribed in rule 34 (d) if in doubt as to the intention of the crossing vessel.

Crossing vessels are warned not to cross the channel or fairway if this crossing should come in the way of a vessel proceeding along the channel who cannot deviate due to the depth or width restriction of the channel.

Sound signals have been mentioned which may be used if in any doubt about the intention of either vessel.

It does say that a vessel will not cross a channel or fairway – she can do so as long as she does not impede the passage of a ship following the channel.

In a narrow channel or fairway overtaking may prove to be difficult, but it may be necessary for some reason, ship behind gets a priority berthing etc. In this case, if the vessel behind wants to overtake then she has to sound the signal – Two prolonged blasts followed by one short blast to mean “I intend to overtake you on your starboard side”;

Two prolonged blasts followed by two short blasts to mean “I intend to overtake you on your port side”.

This is a request signal and has to be answered by the ship ahead either in the affirmative by sounding –One prolonged, one short, one prolonged and one short blast, and the ship ahead should go to one side of the channel and allow sea room for the other ship to overtake.

Only once the confirmation has been received can the ship behind take action. If the answer was positive and overtaking has been permitted then she should first watch the other ship and when the passage has been widened for her she should overtake.

If the ship ahead is in any doubt about the sound signal that she heard or at a later stage while overtaking is in progress and she feels that a close quarter situation may develop then she may sound the signal:-  at least five short and rapid blasts on the whistle.

(ii) This rule does not relieve the overtaking vessel of her obligation under rule 13.

Okay so the ship ahead has agreed to be overtaken, but the responsibility and obligation as per Rule 13 still remains on the ship behind, she cannot find fault with the ship ahead if some mishap occurs. This is the reason that she has to make sure that after answering in the positive the ship ahead has made adequate sea room available for her to overtake. Otherwise, even if the sound signal is positive she should not overtake, if in doubt she may sound the signal again.

f. The vessel nearing a bend or an area of a narrow channel or fairway where other vessels may be obscured by an intervening obstruction shall navigate with particular alertness and caution and shall sound the appropriate signal prescribed in rule 34 e.

Almost like a car sounds a car horn when nearing a crossing, it alerts traffic on the blind side of the bend that a ship is about to cross. This is especially relevant in channels and rivers and fairways where up and down traffic are numerous. 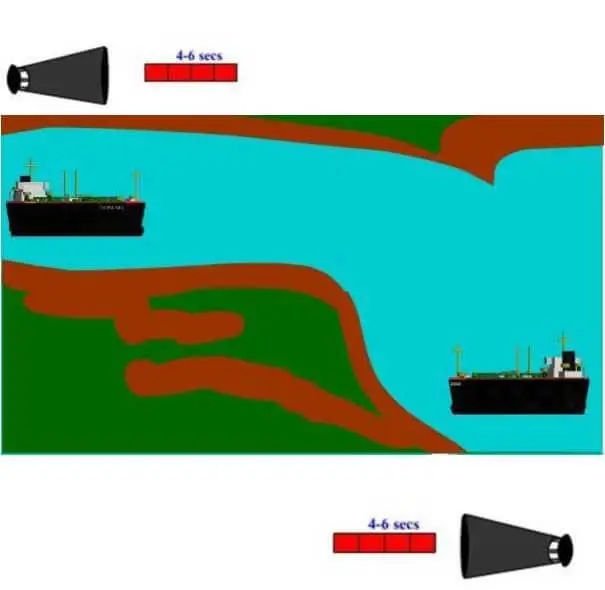 g. Any vessel shall, if the circumstances of the case admit, avoid anchoring in a narrow channel.

A general advice, circumstances of the case admit means as far as possible she should not anchor, but if due to some extraordinary circumstances she has to anchor then she should have to warn all vessels and take special care. 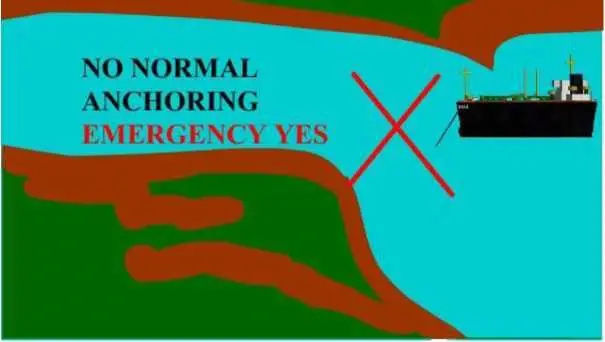