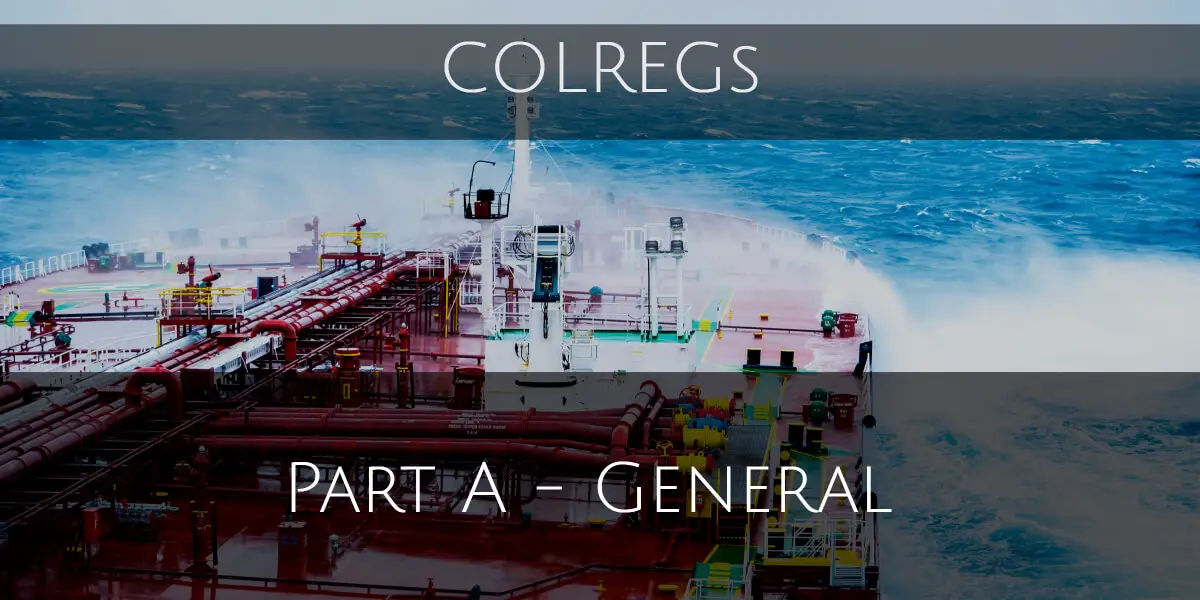 For the purpose of these Rules except where the context otherwise requires:

a. The world “vessel” includes every description of watercraft including non-displacement craft, WIG craft and seaplanes used or capable of being used as a means of transportation on water.

Meaning: All types of craft that float on water and are used as a means of transportation. Also included are crafts, which do not displace water – such as hovercraft. A seaplane when on the water displaces water so as long as it is on the surface of the water it is considered as a vessel. All barges are also included since no propulsion system has been mentioned in this part of the Rule.

b. The term “power-driven vessel” means any vessel propelled by machinery.

Meaning: Power here means power obtained from machinery, such as diesel engines, from the smallest to the largest, sailing vessels are not included as long as they are purely under sail, vessels under oars are also not included.

c. The term “sailing vessel” means any vessel under sail provides that propelling machinery if fitted, is not being used.

Meaning: Fishing vessels means vessels actually fishing and which due to their equipment in the water are unable to move away and keep clear of other vessels. If the fishing vessel is not fishing or is using equipment, which does not restrict their taking evasive, action for safety then they are not termed as fishing vessels. The equipment as specified under the Rules is nets, lines (long line tuna fishing), trawls or other equipment, which are similar.

e. The word “seaplane” includes any aircraft designed to manoeuvre on the water.

Meaning: Obvious meaning, an aircraft which in an emergency is landing (ditching) in the water would not be termed as a seaplane, only those planes which by their construction and purpose can safely land, take off and manoeuvre to a pier or jetty are called seaplanes.

f. The term “vessel not under command” means a vessel which through some exceptional circumstances is unable to manoeuvre as required by these Rules and is, therefore, unable to keep out of the way of another vessel.

Meaning: Here a vessel not under command means any vessel, which because of some reason cannot keep out of the way of other vessels. Like ME breakdown and she cannot anchor, steering failure, launching a rescue boat or a lifeboat.

Meaning: This includes a ship which is doing some special work by which she can move only in one direction – say ahead, but cannot alter her course to take evasive action neither can she slow down or speed up to avoid a collision then in that case the vessel would be restricted in her ability to manoeuvre.

The term “vessels restricted in their ability to manoeuvre” shall include but not limited to:-

The term “vessels restricted in their ability to manoeuvre” shall include but not limited to:

h. The term “vessel constrained by her draught” means a power-driven vessel, which, because of her draught in relation to the available depth and width of navigable water, is severely restricted in her ability to deviate from the course she is following.

Meaning: This is applicable to POWER DRIVEN VESSELS, which because of their draft in comparison to the depth of water at that place is so great that she cannot alter to avoid a collision since to do that they would run aground.

However, if there were an adequate width of the channel through which they are moving then they would not be classed as constrained by draught.

Thus a VLCC with a draft of 18m would be classed as a ‘vessel constrained by her draught’ in a channel where the least depth is 21m (3 m safety for squat etc) and the width of the channel is just 600 metres, but in the Pacific, she would be an ordinary vessel.

If the channel or bay is such that all over the bay the depth is as mentioned but the size of the bay is 30NM by 40NM then she would not be a ‘vessel constrained by her draught’.

i. The word “underway” means that a vessel is not at anchor, or made fast to the shore, or aground.

Meaning: This term is somewhat vague. The opinion has been held that a vessel, which is intentional, anchored with a proper anchor and intends to hold her position, is anchored. But if the vessel ha dropped her anchor to turn the vessel in a tide or is dredging meaning that the anchor has been dropped underfoot and the vessel is being dragged or is under her own power and is steaming astern (the anchor helps in keeping the bow in line) then in these cases the vessel would not be termed as at anchor.

If the vessel drags her anchor and moves away then too she is not at anchor.

Thus the meaning of ‘at anchor’ means in relation to the ‘made fast to shore’ and ‘aground’ that is the ship cannot move or drift away.

j. The words “length” and “breadth” of a vessel means her overall length and her greatest breadth.

Meaning: Here LBP does not mean the length.

k. Vessels shall be deemed to be in sight of one another only when one can be observed visually from the other.

Meaning: The vessel being observed should be capable of being seen with the observer’s eyes and not by any electronic device, this is so because the aspect of the vessel is very important, the human brain analyses data from input more effectively than an electronic device. A change in other vessels heading is very readily apparent when observing visually, by electronic means it has a time lag.

l. The term “restricted visibility” means any condition in which visibility is restricted by fog, mist, falling snow, heavy rainstorms, sandstorms or any other similar causes.

Meaning: Restricted visibility may be caused by any of the above conditions and also by any other means, for example, the smoke from forest fires / Volcanic Eruptions (recently: 2015)  in the Indonesian forests had drastically reduced visibility in the Malacca Straits some years back.

m. The term “Wing-In-Ground (WIG) craft” means a multimodal craft which, in its main operational mode, flies in close proximity to the surface by utilising surface-effect action.