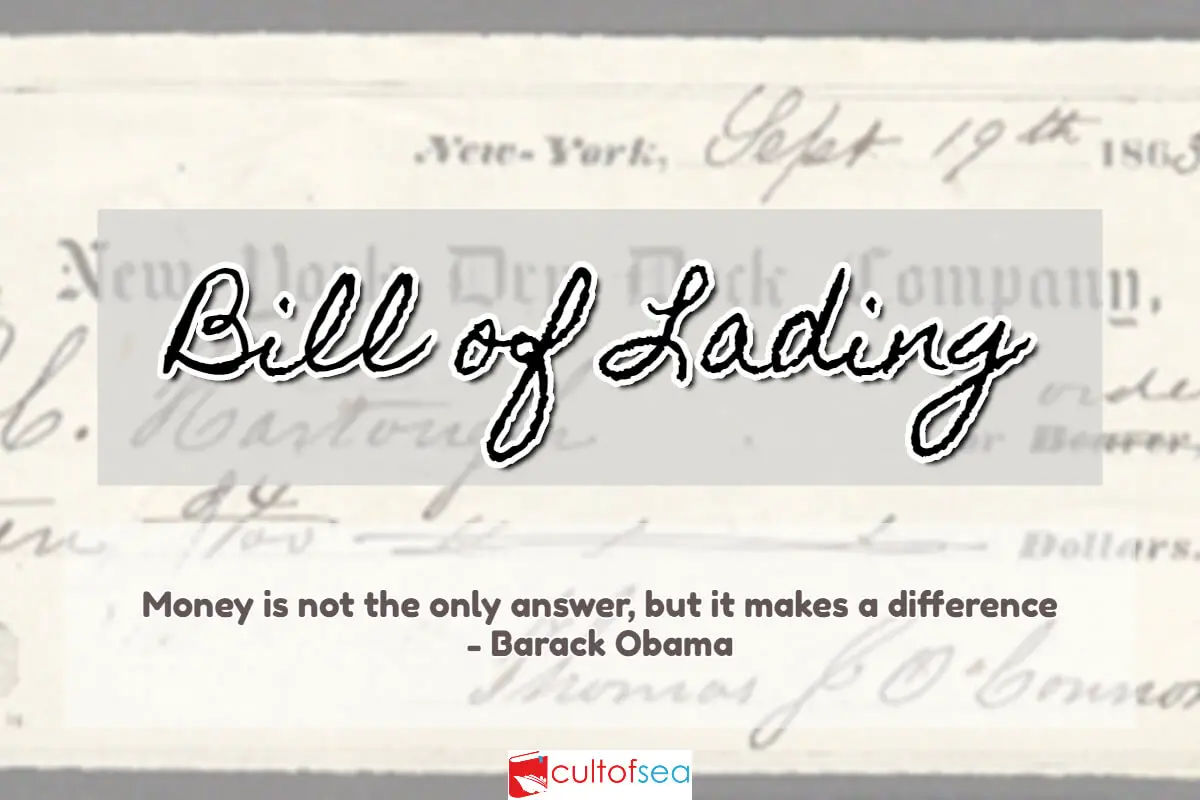 A Bill of Lading is a receipt for goods either received (before shipment) or shipped on board.

The B/L’s prime function is as a receipt issued for:

B/L as evidence of contract

The conditions on which goods are accepted for shipment constitute the terms of the contract of carriage between the shipper and the carrier, except when the shipper is also a charterer; in which case,

Where there is no charter party e.g. where containerized cargo is loaded on a container vessel in the shipowner’s own B/L, the shipowner is the legal carrier and issues its own B/L containing the company’s terms and conditions of carriage. Some liner operators issue a booking note signed by both the parties, which is a contract of carriage.

B/L as a document of title

A document of title is a document, which gives a person (bailee) the authority to hold the cargo and deliver it to any person in exchange of that document.
Possession of an original B/L is equivalent to the right to possession of the goods as per the B/L. In other words, any holder of the original B/L can obtain delivery of the goods at the discharge port by producing the original B/L.
The title of the goods can be transferred after shipment to a third party by negotiation. A B/L made out so as to enable its negotiation is a negotiable document of title and B/L not made out in a way that permits negotiation is termed as “non-negotiable” and clearly endorsed to indicate that.

Transfer of title from the shipper is made under three methods:

The reason for having three original B/L is that in case the 1st original is lost or misplaced the consignee can take delivery of the cargo with the 2nd or 3 original. Nowadays with electronic B/L generation, the need of three original B/Ls is generally not required. Several “non-negotiable” B/Ls are given to the shipper for various purposes including the one marked “Captain’s Copy”.

B/Ls are produced in many styles by shipping companies, shippers, charterers, freight forwarders and organisations like BIMCO. Several types are used for different purposes.

Difference between a Clean and Dirty B/L

A clean B/L has no superimposed clauses stating a defective condition or shortage of the goods. It states that the goods are received in apparent good order and condition without any remarks as to their condition.
A dirty B/L is also known as a ‘claused’ or ‘foul’ B/L. It is claused with remarks such as ‘torn bags’, ‘rusty drums’ or ‘three more cases in dispute – if found on board will be delivered’ etc.
A banker normally demands a full set of clean B/L as per the terms of the Letter of Credit (LoC). Pressure will be exerted on the master to release a clean B/L even when the actual conditions do not justify doing so.

What is Letter of Indemnity (LoI)?

Letter of Indemnity (Lol) or a back letter as it is sometimes called is often offered by the shipper promising to indemnify the master or the carrier against any loss or liabilities as a consequence of signing a clean B/L. However, acceptance’of a Lol for a clean B/L makes the master party to an act of deception or fraud on banks, consignee/buyer, and insurer, since it is an attempt to obtain payment for goods knowing them to be unsound. This type of LoI has no legal standing in the courts of law and cannot be sued on if the shipper goes back on his promise of indemnity.
A master must consult his owners and the P & I club if he is in doubt. He must never accept a Lol without the written orders from his owners.

A Mate’s receipt (MR) is a receipt issued and signed by the chief mate of the ship for goods received on board. MR is nowadays replaced by a modem document called the Standard Shipping Note (SSN), but can still be seen in a conventional trade like general cargo, dry bulk or tanker. The information in both the MR should be identical to that of the B/L.

The MR should be completed from the ship’s tally and show the actual quantity and condition of the cargo as received. When the condition of cargo justifies it, the M/R should be remarked as ‘torn bags’, ‘stained bales’ or ‘rust drums’ etc. Should there be a difference in the tally of the ship and the shipper, MR should reflect the smaller of the two figures with the remark that “X more bales in dispute, if onboard to be delivered”, X being the difference in the tally figures. MR is normally in shipowner’s format and made in triplicate. The original is given to the shipper, the 2nd given to the agent and the 3rd left in the book of MR to be referred to at the time of issuance of the B/L. M/R is not a document of title.

Precautions to be taken while signing a B/L

When a shipmaster has to sign and issue original bills of lading, he must take great care to ensure that all potential contractual pitfalls are covered. He must consult the P & I club and seek their advice before signing and releasing the original B/L. Shipped B/L is signed and given to the shipper through the agent. Freight may be payable before signing the B/L depending on the carrier’s terms.
When an MR is issued to the shipper on shipment of cargo, the MR may be required to be surrendered before issuance of the original shipped on board B/L.
The master must incorporate following before issuance of the B/L:

Every original B/L must be fully signed by the authorised signatory.

A Sample Bill for reference: 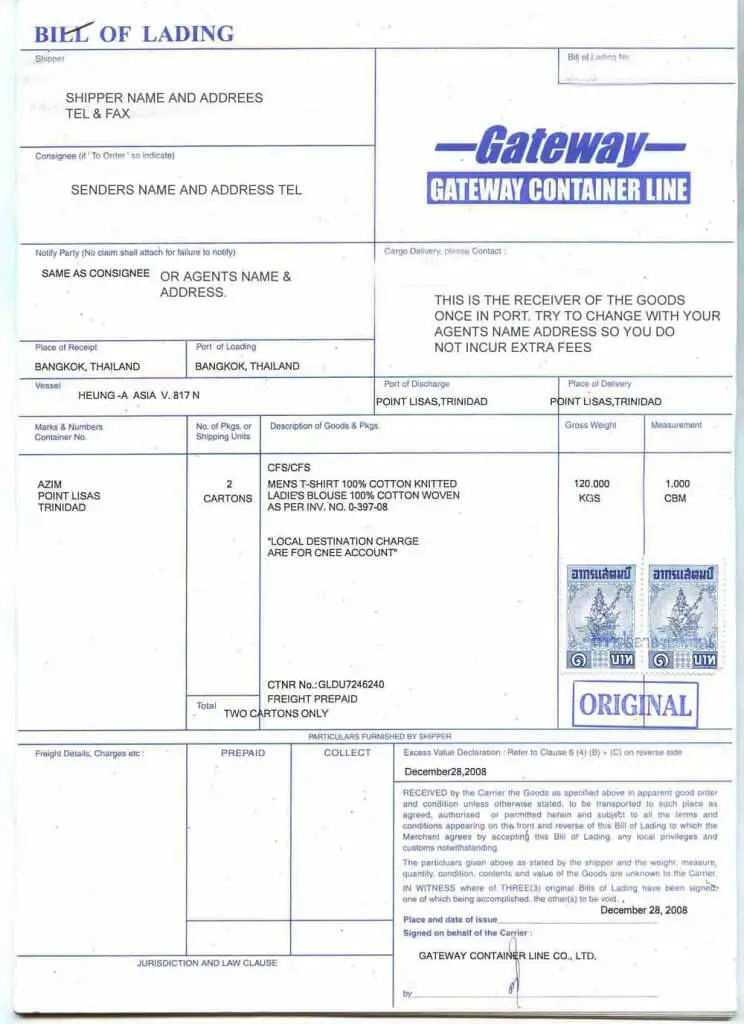