You are here: Home / Bridge Equipment / Ship’s Magnetic Compass – Dry and Wet Compass with their care, maintenance and bubble removal 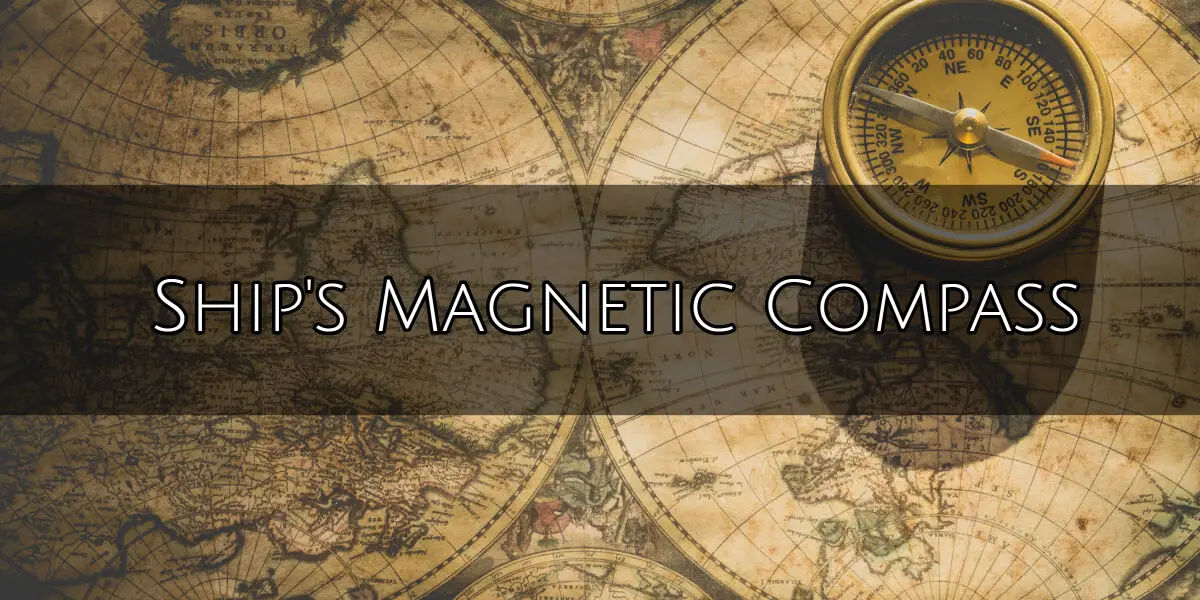 As per Chapter V of SOLAS 74, as amended, a magnetic compass is a compulsory part of the shipborne navigational equipment. This is in addition to the gyro compass & suitably placed repeaters on the ship. This is so primarily because of the reliable dependence one can place on the magnetic compass, as a standby compass in the event of failure of electrical power on board. The regulation also stipulates that the magnetic compass should be properly adjusted and a table or curve of deviations is available on board at all times.

Our intention is only to give you a brief description and salient features of the magnetic compass here.

This is normally placed on the upper bridge on the centre line of the ship or in rare cases on the upper part of the poop. From the compass position, it is necessary to get a clear view all around the horizon.

There are two types of compasses in use.

The compass card is made of rice paper. This is very light & is not affected by temperature changes. This paper is divided into several segments and glued to each other and connected to the aluminium ring at the edge by silk threads.

The directive element consists of three, four or five pairs of thin cylindrical magnets arranged parallel to each other in the N/S axis of the card a few centimetres below the card. They are so arranged that the longest pair is closest to the centre, such that their ends form a circle. The method used ensures that the centre of gravity of the entire card assembly is below the tip of the pivot about which the card is free to rotate.

The card assembly is attached to an aluminium ring about 10 inches in diameter with a central hub fitted with a sapphire cap. This rests on an iridium tipped pivot made of a non-magnetic material. This arrangement provides a frictionless support and allows the smooth rotation of the card.

The card assembly is contained in a brass compass bowl and sealed by a transparent glass top. The bowl has a glass bottom, covering a glass hemisphere, which contains a mixture of alcohol and water, the weight of which lowers the centre of gravity of the entire bowl, well below the compass card.

On the forward side of the bowl, there is a well-marked lubber line to mark the fore and aft line of the ship and indicates the ship’s head at all times.

The bowl is suspended on two athwartship projections known as “gimbals” on the same level as the compass card. These gimbals rest on ‘V’ Shaped cuts on the gimbals ring encircling the compass bowl. The gimbal ring is further pivoted in its forward & after side. This ensures that the compass remains horizontal even when ship rolls or pitches.

The steering compass is normally located on the monkey island inside a binnacle. This is a cylindrical container made of teak wood/aluminium/fibreglass and brass fittings. No magnetic material is used in its construction. The compass bowl is slung in the upper part of the binnacle. A small door in the mid-section allows access to an electric bulb, to illuminates the card from below through a slot. The intensity of light can be controlled either electrically or by a mechanical shutter of the slot by means of a lever handle accessible from the after part of the binnacle. 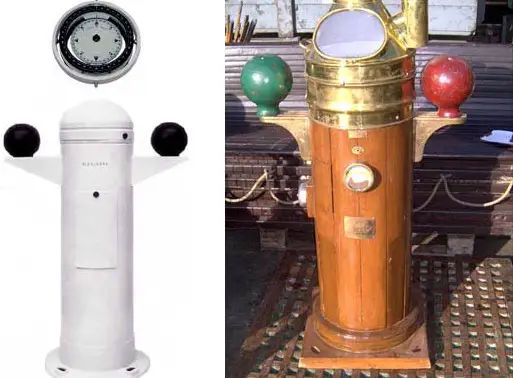 The lower part of the binnacle contains a number of holes both in the fore and aft & athwartship directions to place corrector magnets at the time of compass adjustment. The lower binnacle also has a brass vertical tube at its centre. This tube carries a ‘bucket’ to introduce vertical magnet to correct the heeling error. The bucket can be raised or lowered by means of a brass chain, which can be secured at the required height. 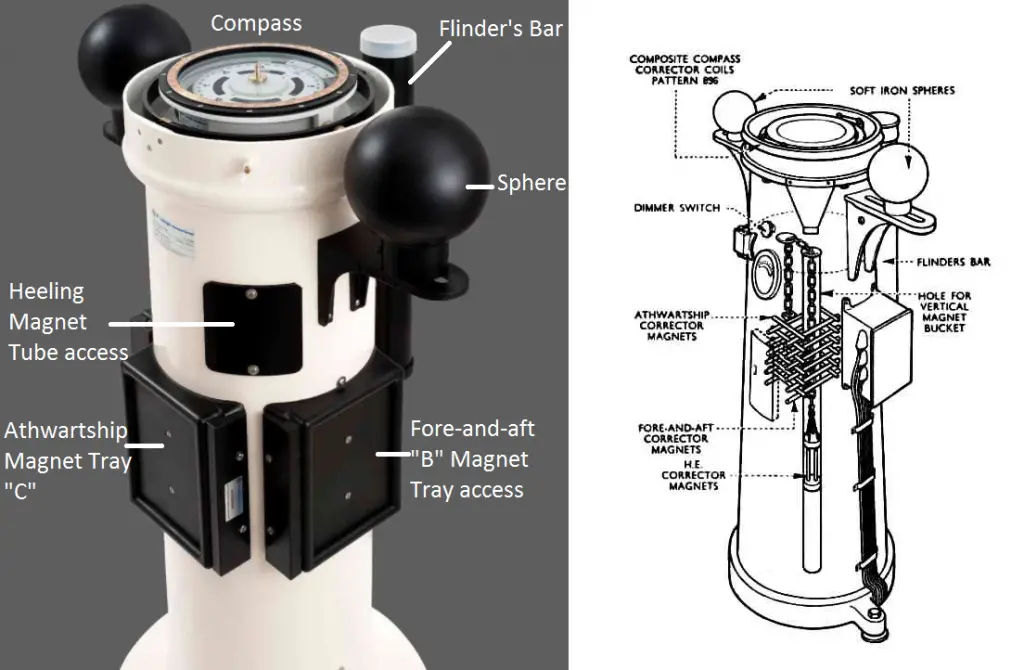 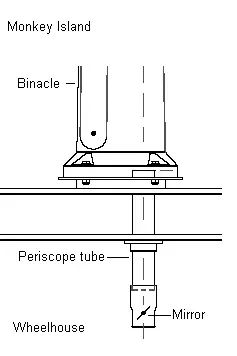 There are two soft iron spheres carried on brackets fitted on port & starboard side of the binnacle. These are called quadrantal correctors. They can be moved on slots on the brackets and fixed at a specified distance during compass adjustment. Similarly, there is a vertical soft iron container made of brass about 7 to 10 cm in diameter and about 60 cm in length fitted normally forward of the compass. If the ship has considerable superstructure & vertical fittings forward of the compass, this brass container may be abaft the compass. This is called the “Flinders Bar” and contains various lengths of soft iron and/or wooden substitutes to achieve the required height during compass adjustment.

A large brass hood is provided to cover the top part of binnacle to protect the compass card & bowl from direct sun’s ray, sprays etc, which must be kept closed except when in use.

There is a circular track graduated in degrees provided on top of the glass top ring of the compass card, to fix an azimuth ring to take the bearing.

As stated earlier wet card compass is less sensitive to small disturbance and so more useful as a steering compass, without any loss of accuracy.

The Wet card is made of mica in one piece & the graduations are printed on the edges. The card is attached to a nickel silver float chamber, which has a sapphire cap at the centre. The Cap rests on an iridium tipped pivot. Though the weight of the wet card is considerable, the buoyancy of the float chamber reduces the load on the pivot and allows a frictionless rotation of the card. 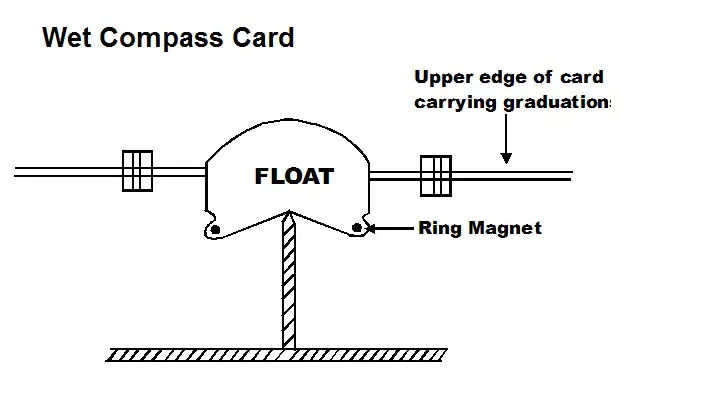 The bowl containing the card is filled with a mixture of distilled water & pure ethyl alcohol, which has the following properties:

The diameter of the bowl is about 23 cms, whereas the card is only about 15 cms diameter. This gap reduces the disturbances caused by turbulence in the liquid during rotation. The top of the bowl carries transparent glass and bottom has a frosted glass.

The bowl is suspended by gimbals just like a dry compass card. This bowl being heavier than dry card bowl, there is no liquid filled glass hemisphere at the bottom. Instead, lead rings are attached to the bottom circumference to act as ballast to bring the centre of gravity below the gimbals.

The binnacle and its fittings are identical to the dry compass card.

Care & maintenance of the wet card and its binnacle are practically same as the dry card with minor differences.

How to remove the bubble?

Follow the manufacturer’s instructions. In most compasses the bubble can be removed as stated below:

In some modern compasses, a small bubble may be removed by merely inverting the compass gently. The bubble will enter a bubble trap fitted for this purpose. Then gently return the bowl to the upright position. However, if the bubble is large, then follow the five steps stated above.