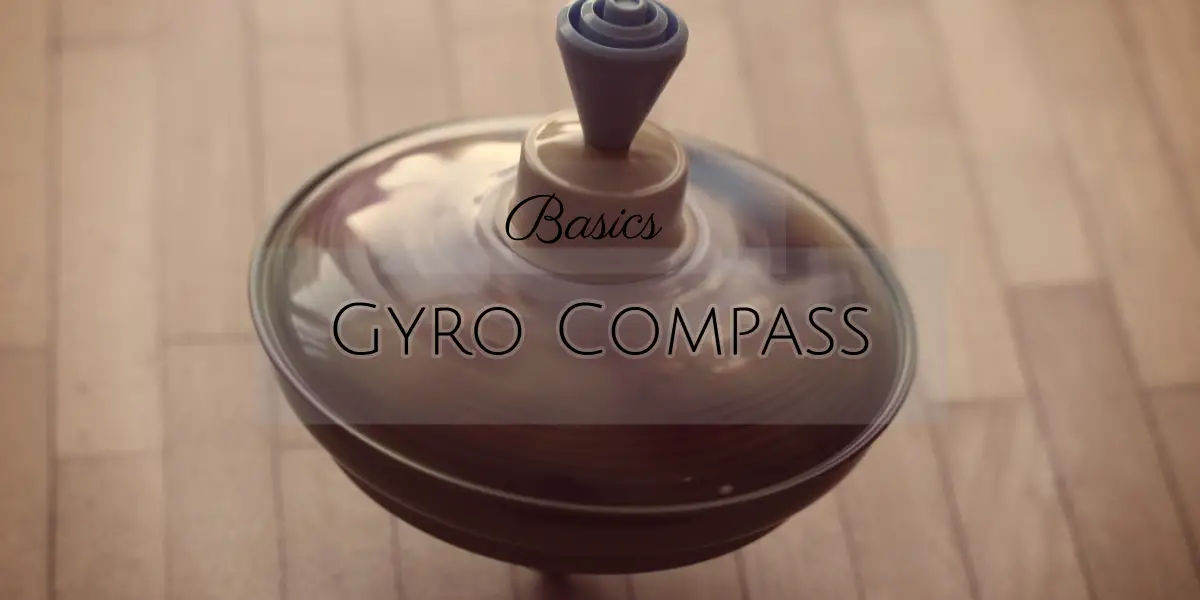 Gyro Compass is a navigational compass containing gyroscope motor that registers the direction of true north along the surface of the earth and it does not depend on magnetism.

A compass with a motorized gyroscope whose angular momemtum interacts with the force produced by the earth’s rotation to maintain a north-south orientation of the gyroscopic spin axis, therby providing a stable directional reference.

The Principle of Gyroscope

A gyroscope consists of a spinning wheel or rotor contained within gimbals which permit movement about three mutually perpendicular axes, known as the horizontal axis, the vertical axis, and the spin axis. When spun rapidly, assuming that friction is not considered, the gyroscope develops gyroscopic inertia, tending to remain spinning in the same plane indefinitely. The amount of gyroscopic inertia depends on the angular velocity, mass, and radius of the wheel or rotor. 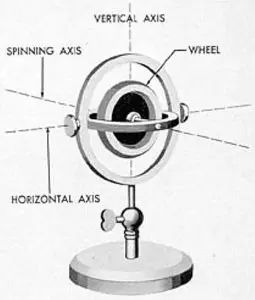 If a gyroscope is placed at the equator with its spin axis pointing east-west, as the earth turns on its axis, gyroscopic inertia will tend to keep the plane of rotation constant. To the observer, it is the gyroscope which is seen to rotate, not the earth. This effect is called the horizontal earth rate and is maximum at the equator and zero at the poles. At points between, it is equal to the cosine of the latitude.

If the gyro is placed at a geographic pole with its spin axis horizontal, it will appear to rotate about its vertical axis. This is the vertical earth rate. At all points between the equator and the poles, the gyro appears to turn partly about its horizontal and partly about its vertical axis, being affected by both horizontal and vertical earth rates. In order to visualize these effects, remember that the gyro, at whatever latitude it is placed, is remaining aligned in space while the earth moves beneath it. 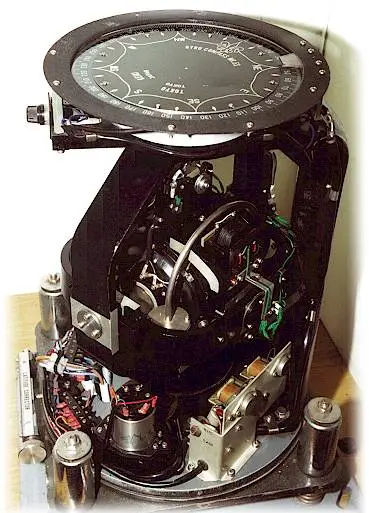 Cut Section of a Gyro compass 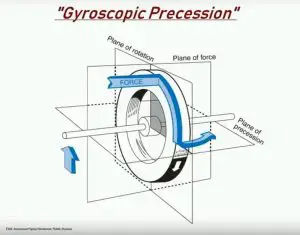 To make a gyroscope into a gyrocompass, the wheel or rotor is mounted in a sphere, called the gyrosphere, and the sphere is then supported in a vertical ring. The whole assembly is mounted on a base called the phantom. The gyroscope in a gyrocompass can be pendulous or non-pendulous, according to design. The rotor may weigh as little as half a kilogram to over 25 kg.

To make it seek and maintain true north, three things are necessary.

To make it seek the meridian, a weight is added to the bottom of the vertical ring, causing it to swing on its vertical axis, and thus seek to align itself horizontally. It will tend to oscillate, so a second weight is added to the side of the sphere in which the rotor is contained, which dampens the oscillations until the gyro stays on the meridian. With these two weights, the only possible position of equilibrium is on the meridian with its spin axis horizontal.

To make the gyro seek north, a system of reservoirs filled with mercury, known as mercury ballistics, is used to apply a force against the spin axis. The ballistics, usually four in number, are placed so that their centers of gravity exactly coincide with the center of gravity of the gyroscope. Precession then causes the spin axis to trace an ellipse, one ellipse taking about 84 minutes to complete. (This is the period of oscillation of a pendulum with an arm equal to the radius of the earth.) To dampen this oscillation, the force is applied, not in the vertical plane, but slightly to the east of the vertical plane. This causes the spin axis to trace a spiral instead of an ellipse and eventually settle on the meridian pointing north.

Since a gyrocompass is not influenced by magnetism, it is not subject to variation or deviation. Any error is constant and equal around the horizon, and can often be reduced to less than one degree, thus effectively eliminating it altogether. Unlike a magnetic compass, it can output a signal to repeaters spaced around the vessel at critical positions.

But it also requires a constant source of stable electrical power, and if power is lost, it requires several hours to settle on the meridian again before it can be used. This period can be reduced by aligning the compass with the meridian before turning on the power.

The gyrocompass is typically located on the wheelhouse as close as possible to the center of roll, pitch and yaw of the ship, thus minimizing errors caused by the ship’s motion.

Repeaters are located at convenient places throughout the ship, such as at the helm for steering, on the bridge wings for taking bearings, in after steering for emergency steering, and other places. The output can also be used to drive course recorders, autopilot systems, plotters, fire control systems, and stabilized radars. The repeaters should be checked regularly against the master to ensure they are all in alignment. The repeaters on the bridge wing used for taking bearings will likely be equipped with removable bearing circles and azimuth circles.